Future of Chitral varsity in jeopardy…

CHITRAL: The future of University of Chitral is in jeopardy as the provincial government has failed to provide land for construction of its building for the third consecutive year, forcing the federal government to withdraw the Rs3 billion grant released in 2017, from the current budget.

Sources in the higher education department told Dawn that after the 18th Constitutional Amendment the concerned provincial government made available the land for establishment of a public sector university, while the federal government bore the expenses of its infrastructure, including the building.

They said the federal government had released Rs3 billion in 2017 in line with the announcement of then prime minister Nawaz Sharif which he had made in a public gathering in Chitral a year before, but the PTI-led government in the province did not provide land due to which the funds remained unutilised.

Classes in different disciplines are being run in a makeshift campus

They said the University of Chitral was inaugurated by then PTI chairman and opposition leader in the National Assembly Imran Khan and then chief minister Parvez Khattak on July 5, 2017, by merging the regional campuses of Shaheed Benazir Bhutto University and Abdul Wali Khan University, and classes were also started there.

In the fiscal 2018, the provincial government allocated Rs880 million for purchase of land measuring 400 kanals as per criterion of the establishment of a university, but the money was not released due to one reason or the other. The land in Seen Lusht village had been selected for the university and the revenue department had fulfilled all formalities for its acquisition, they explained.

The sources maintained during the current year?s budget of the province, no substantial amount had been allocated for acquisition of land, which meant that the federal government would also close the chapter on its part keeping in view the lukewarm response of the province.

Presently, over 1,800 students are enrolled in different disciplines of the university in under-graduate and postgraduate classes, while the number of students seeking admissions to the varsity has been estimated at 4,000 every year.

An official of the university said the present makeshift campus of the university was quite insufficient with regard to availability of space. He said due to limited space, no more disciplines could be started.

Former district nazim Maghfirat Shah said lack of interest on the part of the PTI leadership towards the establishment of university in Chitral had shocked the people.

He said Imran Khan as then opposition leader had inaugurated the classes in the university in 2017, and his coming into power had raised the hopes of the locals about speeding up the process of construction of the varsity building, but to no avail.

Mr Shah said it was high time the federal and the provincial governments allocated special grants for purchase of land and construction of the building.

Symbolic, yet Powerful Reform: PM House Converted into a University 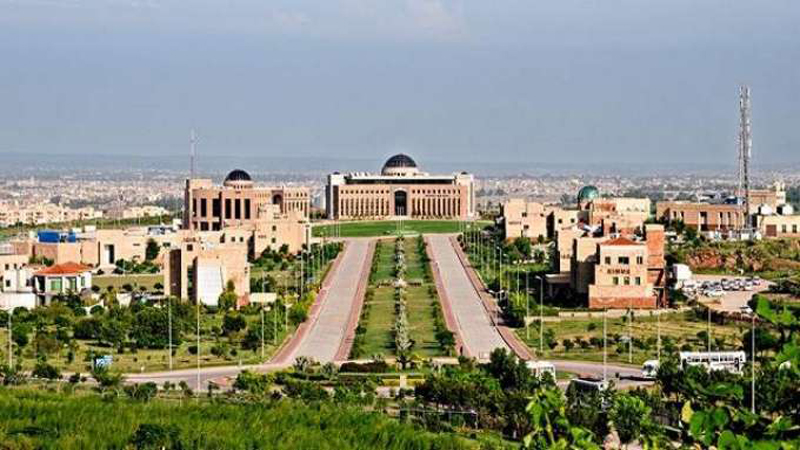 PM Imran Khan presided over the inauguration ceremony of the two-day launch conference, which brought together experts from all over Pakistan as well as many renowned scholars from China, United States and European countries.

The conference aims to focus on how the new university will help in addressing emerging challenges and converting them into opportunities.

Initially, the Institute of Advanced Studies (IAS) will be established at this university. The institute will build relevant in-house research teams, which in turn will engage and collaborate with researchers and research institutions within the country and overseas. In particular, it will collaborate with and guide various centres of advanced studies established by the Higher Education Commission (HEC) in recent years. Subsequently, in order to sustain and enhance the quality of research programmes, INU will initiate PhD level programmes in critical fields and focus on using the research impact on socio-economic development.

Speaking on the occasion, the PM said that this university will not just be a symbolic representation of what ?we envisage for our youth but also become a centre which will provide research based guidance for all the social, economic as well as institutional challenges. There is no second opinion that nations cannot progress without quality education in general and particularly higher education. We have everything for us in the governance system of Riasat-e-Medina. It was that great vision which helped Muslims become great academics and researchers for many centuries?.

Shedding light on his vision to turn PM House into a world-class university, he said the government is committed to remove colonial legacy of grandeur and promote simplicity.

?We will create awareness among the masses so that they can protect their rights.?

The PM emphasised that human development is the major means of national and social prosperity.

?This university will be an autonomous entity and will function without any government intervention. It will take a start from a very good institution, maintain its progress and turn into a centre of excellence which will attract scholars from across the world to help find solutions to national and global problems,? he said this while referring to the House of Wisdom, a major Abbasid academy set up by Khalifa Haroonur Rasheed. He stressed the need for efforts to ensure the rise of downtrodden segments of society, which he said is impossible without quality education.

Pointing out the financial crisis facing the country, he assured that the government will fully support the growth of higher education. He said the money recovered through the government?s accountability drive will be channelised for meeting educational goals.

Earlier in his welcome address, Education & Professional Training Minister Shafqat Mahmood appreciated HEC for its efforts to promote higher education and research. He underscored that the establishment of INU is a step towards fulfillment of government?s commitment to make best public use of the lavish government estates.

?INU is envisioned as an apex institution designed to support research-based policy formulation,? he said.