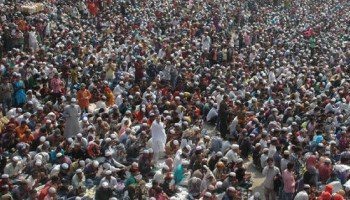 Dear Sir,
The Tableeghi Jamaat is one of the most organised and disciplined voluntary organisations one can witness these days. It was formed in 1926 and has been flourishing since then. Wikepedia describes it as?”one of the most influential religious movements in 20th century Islam”. In the past 92 years it has been striving to promote ‘Huqooq ullah’ (duties towards Allah Almighty) amongst muslims and has been largely successful in that. Cropping up of numerous mosques with even more numerous prayer goers is the achievement of tableeghi jamaat and should be appreciated at that.

However with due respect I wish to say that in the 92 years of their sermons they have (almost) totally omitted ‘huqooq ul Ibaad’ (obligations towards human beings) from their preaching. The result is obvious. Today we see mosques everywhere (Alhamdulillah) full of prayer goers five times a day but when these prayer goers come out of the mosque we see them devoid of respect for ‘huqooq ul ibaad’. This would not have happened if huqooq ul ibaad was emphasized by the tableeghi sermon givers from day one.

The international Tableeghi ijtima is to begin in a weeks time and people from all over Pakistan are heading for Raiwand to attend it. My request is that the theme of this years congregation should be declared as ‘Huqooq ul Ibaad’ which is equally important in Islam as ‘Huqooq ullah’ and which has been ignored for too long. .. Wg Cdr (r) Fardad Ali Shah, Chitral 31 Oct 2018