Queen Elizabeth with His Highness the Aga Khan at a dinner hosted by Her Majesty at Windsor Castle.?

Her Majesty the Queen Elizabeth hosted a dinner on Thursday to mark His Highness the Aga Khan’s Diamond Jubilee.

Present at the dinner were The Prince of Wales and The Duchess of Cornwall, The Duke of York, The Princess Royal and Vice Admiral Sir Tim Laurence.

The Aga Khan, was bestowed the title ?His Highness? by Her Majesty the Queen in 1957 the year of his accession as hereditary leader of the Shi?a Ismaili Muslims, and was appointed Knight Commander of the Most Excellent Order of the British Empire in 2004. ..?Source

The Queen of Gilgit who gifted water to her subjects 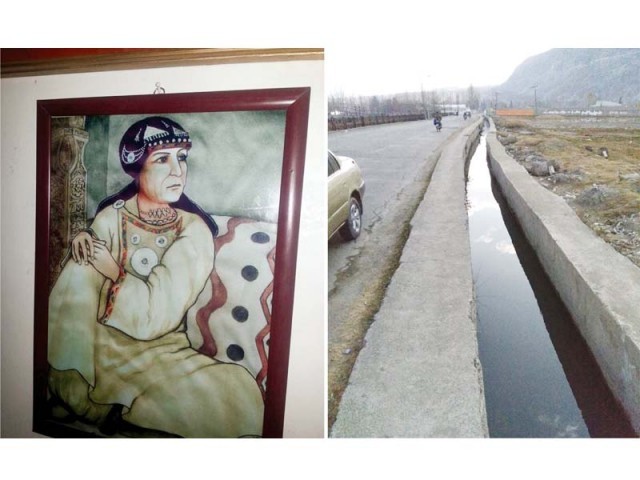 Portrait of Dadi Jawari, a 17th century ruler of Gilgit, and one of the two irrigation channels she got built between 1630 and 1660 AD. PHOTO: EXPRESS

GILGIT:?Through the centuries, most people have tried to seek ?immortality? through different means.

Some tried to do it through pictures or stories about themselves. Others built statues to remind subsequent generations. Others still built giant monuments as a testimony to their grandness.

But few have of these methods have stood the trial of time.

But for four centuries, the name of a female ruler in Gilgit has been recalled every time the crops were watered a sip was taken at one of the two irrigation canals that feed the valley.

Dadi Jawari, a 17th century ruler of Gilgit, gave the region perhaps one of its greatest? gifts ever.

Ajeeni daljah and Khireeni daljah are the two main irrigation channels feeding Gilgit which had been built by Jawari between 1630 and 1660 AD.

They had been built to irrigate what is now Kashrote, Nargal, Majini Muhallas, Barmas and Sonikot areas in the heart of Gilgit.

?I am sure that she was one of the finest administrators this region has even seen,? says Sherbaz Bercha, a noted historian in Gilgit-Baltistan.

?The two main channels [Ajeeni daljah and Khireeni daljah] were dug during her rule and I must say we owe the expansion of our city to that great lady,? Barcha told?The Express Tribune.

The channels were built to help expand existing settlements of the time which were confined to Barmas, Jutial and Napoor.

Interestingly, Gilgit?s residents refused to help with the canal?s construction.

The queen, thus, was forced to seek help from the Darel valley ? what is today known as the Diamer district ? to build her canal.

In the absence of proper recorded history of the region, Barcha conceded that they mostly rely on folklore and other accounts to piece together the history.

Ahmad Hasan Dani, a famous historian who wrote History of Northern Areas of Pakistan, wrote that Dadi Jawari used to dress like a man and ride horses and issued orders in her name.

?She took great interest in ameliorating the lives of people, undertook many welfare measures and built many roads in the country, [region]? Dani wrote. He corroborates the construction of the canals in his book.

The queen is also said to have travelled to all parts of her dominion, meeting the locals and inquiring after their troubles.

Once when she was said to be visiting the Sanekar fort in Bagrote area, she was besieged by her opponents. But being a resourceful and capable woman, she managed to break through the siege.

This account, however, is disputed by another historian, the late Shah Raees Khan. He says Jawari ruled Gilgit from 1642 to 1667.

While Jawari brought the gift of water to greater Gilgit, it has been neglected by subsequent generations.

The water of the canals was used for drinking till the early 80s. However, a fast growing population and lack of care for the canals means that water in the channels is highly contaminated and not fit for drinking.

Despite that, the canals, along with her work for women empowerment, mean that Jawari is immortalised in the region.

Today, we can see some of her legacy carried forward by pioneering women such as famous climber Samina Baig.