Chitrall: A large number of men and women including children protested against the partial attitude of Station House Officer (SHO) police station Mastuj. The angry protesters burnt tires and blocked Broghul road for traffic. A public meeting was also held at Brep under the chair of Afsar Khan. During the public meeting a unanimous resolution was also passed by the participants. Through the unanimous resolution they demanded for inquiry against the SHO Mastuj Shafee Shifa. They alleged that Aslam Baig was killed by his wife Zajua Bebi and a police constable Shahabul Ameen who is serving in Chitral police on 14th?April 2017. They said that the accused Shahabul Ameen also confessed in presence of civil witnesses and police investigation staff. Zakia later on married with Shahabul Ameen after killing of her husband. 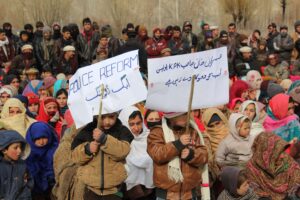 They said that at very early stage SHO pressurized and threatened our eye witnessed that he will get their physical remand and FIR will be lodged against them. As a result they feared and hesitate to produce in court for witness. Speakers on the occasion the speakers said that SHO Mastuj arrested Hidayat Khan Subadar retired and kept him in lockup for 24 hour days. They alleged that when we were on our way to attend the case in court SHO stopped Hidayat Khan and raided on his house for searching as a result he could not attend the court. He got signatures on blank papers from witness and later on he mentioned wrong statement.

They said that SHO trying of his best to weakened our case on the pressure of some politicians and they gestures toward MPA Sardar Hussain. They said that concern SHO harassing the family of deceased Aslam Baig and supporting his killer Shabul Ameen because the accused is also police constable.

They said that SHO concern demanded for vehicle from the aggrieved family for investigation team and we pay 35000 rupees for transport. As well as SHO manipulated statement of witnesses to weak our case. ?They said that accused Shahab walking in their village and still threatening to Purdoom Khan father of Aslam Baig (late). Through a unanimous resolution they demanded from the chief justice of Pakistan for taking suo moto action in this regard because lives of the aggrieved family still under threat because the accused is a police employee and supported by police.

In this connection this scribe also contacted District Police Officer Chitral Capt Mansoor Aman., who called SHO Mastuj and aggrieved party along with investigation officer. He listened their grievances and conducted a departmental inquiry in this regard under supervision of SP Noor Jamal. DPO assured father of Aslam Baig late for each and every possible support in this regard. He also confirmed that Shabul Ameen has been suspended from his service and he would be bound to never threaten father of late Aslam Baig? DPO assured that if it was proved that police has got Rs 35000 from the father of Aslam Baig action would be taken against the police staff and the amount will be returned to Purdoom Khan back.

Chitral .. According to provincial parliamentary secretary and member provincial Assembly Fouzia Bibi, the provincial government has issued notifications for creation of a new tehsil in upper Chitral, namely Mulkow Torkhow tehsil. This makes a total of two tehsils in upper Chitral the other being Mastuj tehsil.. She said the government was sincere in it’s promises and would shortly issue a notification for the newly created Upper Chitral District also. .. CN report, 21 Nov 2017.

Shaista Naz belonging to Mastuj has become the first female engineer from Chitral to be appointed in the C&W department as a sub engineer.