Chitral: In a rare happening, this year the Kalash celebrated their wheat harvest festival (Uchal) at the same time when Eid ul Azha was being celebrated by Muslims. This confluence happens after many years as the Muslim hijri lunar calendar? keeps rotating. Newly elected Kalash MPA Wazirzada was the star of the occasion who welcomed the many foreign tourists attending the function. .. GH Farooqi,, Chitral 23 Aug 2018 (photo by Sajid Tasvirography) 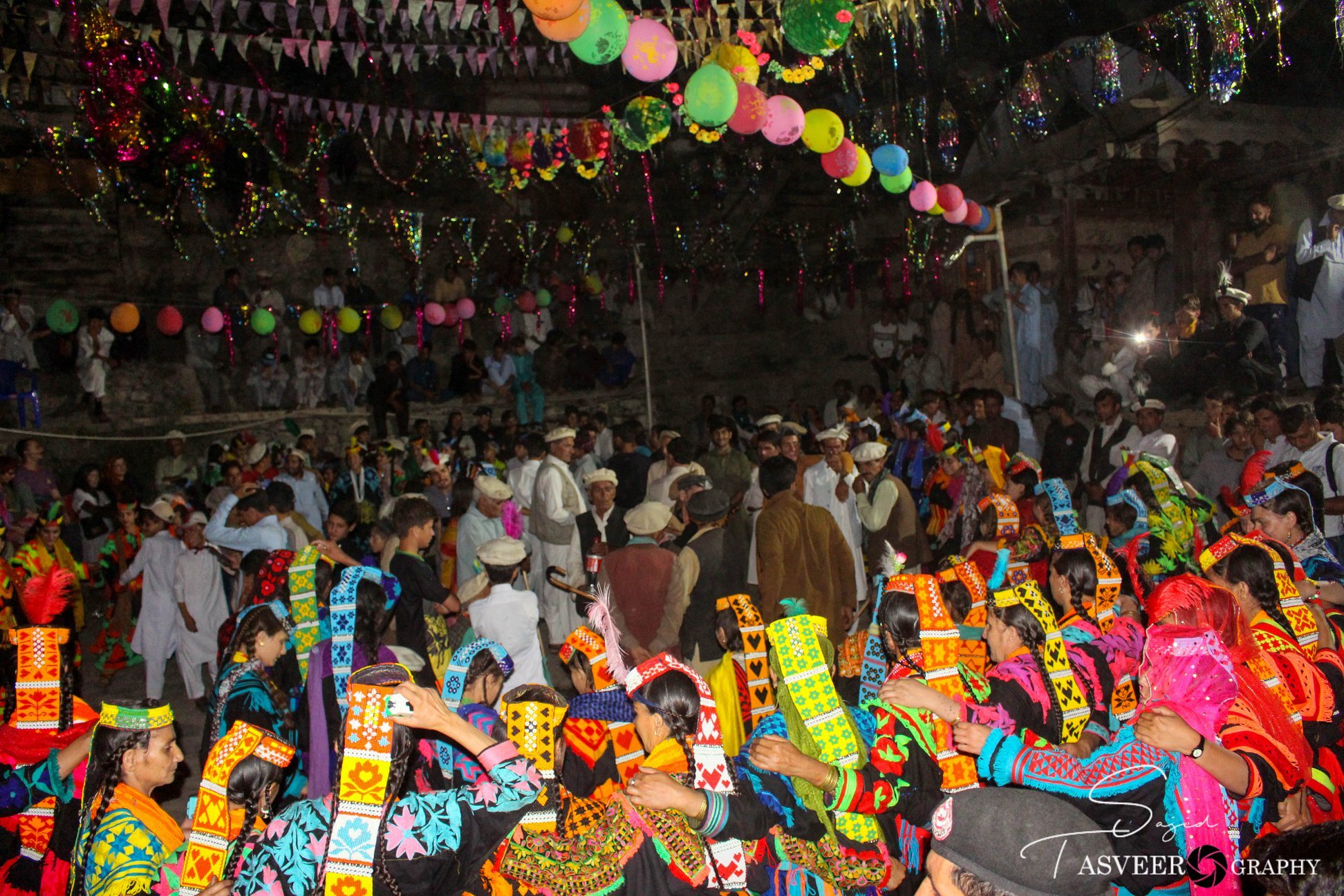 Chitral: Two Chitrali falconers Shahzada?Mohammad Amir Hasanat and Subur uddin, part of a four member Pakistani falconers team led by Kamran Khan Yousafzai, have reached Abu Dhabi to participate in the third International Falconry Festival? It may be noted that falconry has been a traditional sport in Chitral which has now almost dwindled into extinction. The efforts by few individuals to keep the tradition alive is appreciable... CN report, 03 Dec 2017

Chitral — Boroghil Festival 2016 concluded on the 18th day of September. Beginning on the 16th, the festival was held by Local council in collaboration with the Aga Khan Rural Support Program (AKRSP) whereas the awards for different events were provided by Aga Khan Youth and Sports Board (AKYSB) upper Chitral. The festival featured tournaments of Horse polo, Yak polo, Donkey polo, Cricket and Football among the teams of various villages of Boroghil. Member Provincial Assembly Sardar Hussain attended the first two days of the tournament whereas Tehsil Nazim Haji Maghfirat Shah flew in on the final day as the Chief Guest. Tehsil Naib Nazim Abdul Shakur and various other deputies accompanied him on the occasion.

On the final day of the tournament, Chikar B came out victorious in Yak polo beating Chikar A, Lashkar Gaz B claimed the title of Donkey Polo championship by beating Garum Chashma A whereas Chitral Scouts stole the show by clinching the championships in football and cricket by beating Lashkar Gaz and Chilmarabad respectively. Addressing the crowed at the final ceremony, Rahmat Ali, Union council Boroghil, congratulated the local council for successfully organizing the tournament through their meager resources. Representing the people of Boroghil, he presented a number of development proposals to the chief guest. Notable among them were the construction of at least one primary school for girls—which to date doesn’t exist in the area, construction of a hospital that could be accessible in reasonable time in times of emergency, shifting wheat stall (Godam) from Garam Chashma to Garel which is easily accessible to most villages in Boroghil and improvement of road networks and construction of a bridge to help connect far flung villages of Boroghil with the rest of Chitral. He also appealed to the chief guest to declare the festival a calendar event of the district Chitral to ensure it was organized regularly and in a better way in the years to come.

In between the final matches and the ceremony, Chitral Heritage and Environmental Protection Society (CHEPS), headed by Rehmat Ali Jaffar Dost, organized awareness session about education and climate change and cleanliness walk around the polo ground. Saif Uddin, a graduate in Musicology from National College of Arts, Lahore and Yaqoob Ali, a graduate of Lahore University of Management Sciences—members, CHEPS— conducted the awareness sessions, a wave of school-going boys and girls, adults and aged men and women led by the District Naib Nazim Abdul Shakur swept the ground to clean up all the trash scattered around it.
It is worth noting that most of the area of Boroghil Valley still lacks road networks. Most of the travelling takes place on foot or rides—horse rides, donkey rides etc. The Local council said it organized the festival to garner the attention of government as well private entities to enhance tourism of the area which they believe will bring the area to the limelight and help propel development in the area. — Rehmat Ali Jaffar Dost, 24 Sep 2016.

Chitral — When I was going to Chitral to cover the aftermath of the shandur festival 2016, I had no idea what the region had in store for me. When you have space for one story from a region that is generally under-represented, it is inevitable that the most appalling one wins placement.

There is so much more to Chitral than just forced marriages and floods. Whether you are strolling in a bazaar or sitting on a hill overlooking Tirich Mir from the royal abode of the mehtar, the city and its people will force you to extend your trip. The air of regality, serenity and warmth is enough to lure you in. — read further from source