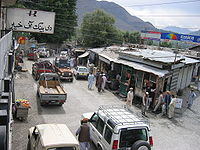 He said he had allowed the administration to pave the part of the road on the sidewalks which was his personal property without insisting on first getting compensation for the land, due to lack of funds with the government at present. No body would extend such a concession to the government rather would try to milk the government at such a time he said.? The shopkeepers thanked him for the deep sweet water well in his prime commercial area which benefits hundreds of people every day. Fardad Ali Shah said he had contributed the largest transport stand in the most convenient area for the public which is benefiting a large portion of the population and has solved the ever present adda problem of the people for once.

Wg Cdr Fardad appreciated the administration for taking measures for the betterment of the people. Shopkeepers of the area gathered at the venue and thanked both the government and land owner for the ongoing work. They demanded street lights in the bazar to stop late night shop breaks which are on the increase. AC Chitral promised them that street lights would soon be put up in this part of the bazar which does not have the facility. .. CN report, 28 Nov 2017