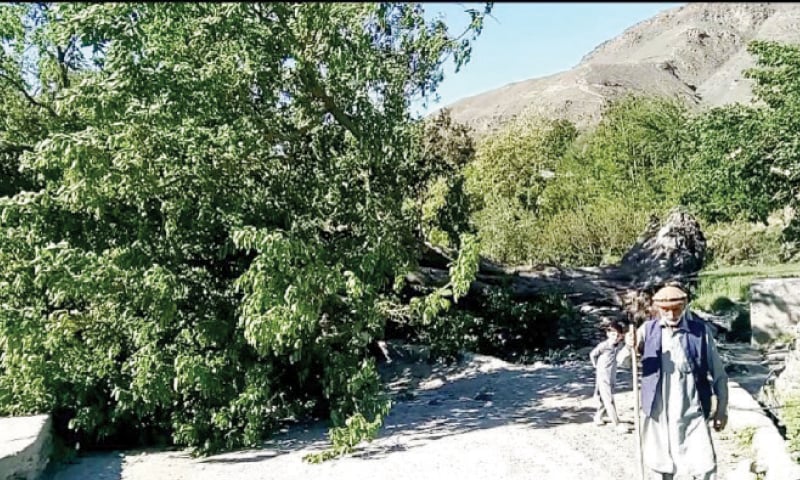 CHITRAL: The historical tree of white mulberry in Singoor village of Chitral town fell to the ground as strong winds continue to lash the valley for the last two days. The tree has already completed its physical age of 200 years.

Dwarfing all the trees in the village, it was known as boekan mrach (the mulberry of birds) and had attained the height of about 100 feet, covering a circular area of over 20 feet radius.

The over 200 years old mulberry tree was located at Singoor village.

The area elders said that as per tradition and tales transmitted orally from the past, its sapling was planted during the rule of Muhtaram Shah Katur II (1792 to 1837), the 10th ruler of Katur dynasty. They said the ownership of the land and the tree standing on it went on changing hands, but no one chopped it partially or solely and it kept on growing both vertically and horizontally, finally becoming an icon of the village.

Haji Gulab Khan said mulberry had its core importance in old days which supplemented the food need as it was dried for the winter season and its leaves were used in silk farming which made the feed of silk larvae.

He said that during his childhood in early 1940s he found the gigantic tree of mulberry as a central place for the villagers who rested under its expansive shade during scorching summer season when there was no electricity.

it inundating the lush green grass with debris leaving behind a permanent drain,” he said.

Haji Gulab said the tree withstood all the floods since then and remained the centre of social life for the villagers. Also, its fruit was enjoyed by all and sundry of the village.

Due to its proximity to Chitral Gol National Park the tall tree attracted a number of species of birds just before sunset which stayed there for night and it was for this reason that it was named as ‘tree of birds’ in local language.

The villagers hunted doves and other migratory birds in this tree as they tended to take rest in the dense and tall tree.

Mohammad Rahim Baig, a landlord of the village, said the fall of the iconic tree had saddened the villagers who had their sweet memories of childhood attached to it.

He said that due to small landholding as a result of rapid population growth the people no more supported trees which occupied space and this was one of the few mulberry trees in the whole village. .. Source