Celebrating the life and times of Aga Khan IV 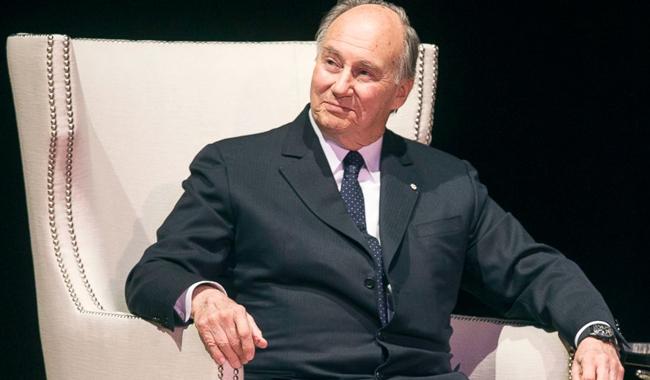 Tomorrow is an important day for Ismaili Muslims all over the world; a season of yearlong celebrations start on July 11 to mark the 60th year of the Imamat of His Highness Prince Shah Karim Al Hussaini, Aga Khan IV.

Though a spiritual leader of Ismailis, Aga Khan holds a special place in Pakistan due to the role of the Ismaili leadership in the foundation of Pakistan and his unique contribution to Pakistani society and its people. This is an occasion for all of us to pay our tributes to a remarkable Muslim leader ? a statesman without a state. It is also an opportunity for us to remember his predecessor, Sir Sultan Muhammed Shah, Aga Khan III, a founding father of this country.

One hundred and six years ago, in 1911, Sir Sultan Mohammad Aga Khan embarked upon a country wide tour of India to collect funds for the Aligarh Muslim University. ?I am now going out to beg from house to house and from street to street for the children of Indian Muslims,? he stated. Just as his ancestors, the Fatimid caliphs, had founded Al-Azhar University in Egypt, Aga Khan wanted a Muslim Oxford in India. Aligarh College became a university in 1920, twenty two years after the death of Sir Syed Ahmad Khan.

Fourteen years earlier, in 1906, Aga Khan had led the process of forming a political platform for South Asian Muslims at a meeting of the All-India Muhammadan Educational Conference in Dhaka. It was he who suggested the name of the party ? All India Muslim League ? and was elected its first president. Aga Khan made a major contribution to the three most important ingredients of Pakistan movement ? the Muslim League, the Aligarh University and the leadership. Let?s not forget that Quaid-e-Azam Mohammad Ali Jinnah was also born into an Ismaili family. What is remarkable here is the fact that South Asian Muslim followed these leaders disregarding sectarian considerations.

In the early 21st century, a major advance in the analysis of economic development is the recognition of the importance of institutions. Institutions have become a central focus of all development initiatives. Interestingly, though world class charismatic leaders, both Aga Khans can be called men of institutions, dedicating their energies to founding and nurturing a host of institutions aimed to serve their own community and the Muslim and global community.

Sir Sultan Mohammed was nominated to represent India to the League of Nations in 1932 and served as president of the League of Nations from 1937 to 1938. In 1945, the Ismaili community celebrated the Diamond Jubilee of Aga Khan III. The wealth generated in the Jubilee was used to establish the Diamond Jubilee Investment Trust, a community-based financial system that further led to the creation of cooperative societies, corporations, building societies and a bank.

The formation of Diamond Jubilee Schools all over India and specifically in the northern areas of Pakistan (now Gilgit-Baltistan) in 1946 laid the foundation for an educational revolution within the Ismaili community as well as the region at large, with literacy levels reaching up to 90 percent in some parts of the region.

Before the Jubilee schools were built, education in the region was a luxury. This is how a teacher explained it to me: ?In those days, there were no schools beyond the 8th grade and anyone aspiring to do matriculation had to go to Kashmir. Not only this, these schools rotated every three years and shifted from one village to another, making it impossible for poor students to continue their education.?

After taking over the leadership of the community in 1957, at the age of 20, His Highness Aga Khan IV further enhanced institutional organisation for education, health, social welfare, women empowerment and strengthening of civil society through the establishment of the Aga Khan Development Network (AKDN). The AKDN now works in 30 countries around the world, employing approximately 80,000 people. This network benefits more than two million people every year.

In 1982, Aga Khan founded the Aga Khan Rural Support Program (AKRSP) to improve the quality of life of the people in Gilgit-Baltistan and Chitral. He handed over the leadership of the programme to Shoaib Sultan Khan, a student of legendary development worker, Akhtar Hameed Khan. For Shoaib Sultan Khan, it was an opportunity to implement the ideas of his teacher on a wider scale, something he had tried with limited success during his career as a civil servant. The AKRSP succeeded in transforming the region into a model of community development.

Turning back to the higher education, Prince Karim Aga Khan chose Pakistan as the base for the Aga Khan University. Chartered in 1983, AKU is Pakistan?s first private international university. With academic programmes in Pakistan, East Africa, the United Kingdom, Syria and Afghanistan, AKU has now established itself as an international institution with ten sites in seven countries.

In 2000, Aga Khan founded the University of Central Asia (UCA) through an international treaty ratified by parliaments of Tajikistan, the Kyrgyz Republic and Kazakhstan and registered with the United Nations. While the presidents of these countries are patrons of the UCA, His Highness the Aga Khan is the chancellor.

Presentation of Muslim heritage is one of the most high-profile passions of Aga Khan. The AKDN has also overseen the restoration of Muslim heritage sites all over the world. It won a 2011 Unesco Award for Culture Heritage Conservation for its restoration of the 900 year old Altit Fort in Pakistan. In 2013, the AKDN restored the tomb of Emperor Humayun in India after six years of hard work.

The Aga Khan Award for Architecture grew from a realisation that traditional Islamic architecture was disappearing in the face of modernization. It was announced at the Islamic Summit Conference in Lahore in 1976 and has since turned into one of the most important architecture awards in the world.

I want to sum up this article with Aga Khan?s efforts at promoting pluralism and presenting the case of the Muslim world in the din of the clash of civilisations ? what he calls the clash of ignorance. According to Aga Khan, it is the failure of pluralism that results in various kinds of conflicts. ?The inability of human society to recognise pluralism as a fundamental value constitutes a serious danger for our future.? According to Aga Khan: ?One of the principal reasons why today there is so much uninformed speculation about conflict between the Muslim world and others is insufficiently complete general education. For instance, the historic root causes of conflict in the Middle East or Kashmir are not addressed at any level of general education in the most powerful western democracies that dominate world affairs.?

True to his message, his followers have laid down their lives while protecting Muslims of other denominations from each other, while they have remained committed to peace and pluralism. Perhaps, it is a time for South Asian Muslims to pay serious attention to the wisdom of His Highness the Aga Khan. From me and my readers, Jubilee Mubarak to His Highness and our Ismaili brothers and sisters.

The writer is an anthropologist and development professional.
Email:[email protected] ?Twitter: @zaighamkhan
Source: ‘The News’