Saving forests is easy; Right approach is the requirement

CHITRAL:  According to a survey conducted by the newspaper DAWN in 2018, people of the the district(s) of Chitral consume 50400 tons of fuelwood, of which 60 percent is oak wood. According to the survey, at this going rate another 23 percent of the forest will be depleted by 2030.

The figures quoted in the reported survey should be worrying for those who care for preservation of the environment. The positive aspect and prospect about all this, is that the deforestation process can be checked effectively.. of course not by abruptly putting a ban on harvesting firewood, but, by first providing an alternative to the firewood requirement. The best source to replace the firewood usage is to provide electricity at subsidised rates to the people of Chitral to use it for cooking, heating etc i.e doing the job which firewood does. 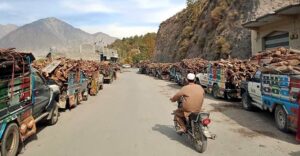 Oak trees and pine trees, as other trees, take ages to mature and money cannot replace them. The other alternative can be purchased with money, i.e providing electricity at nominal rates to those using firewood for sustenance. Many hydel projects are in the making in Chitral. The pace of construction of these hydel projects should be accelerated and electricity from the already operational projects like Golen project hydel power etc should be dished out as suggested.

The devastation of pine forests in the name of timber wood can also be checked by completely banning the felling of trees even if they are windfallen or anything else. Local construction also should be restricted to be carried out without using wood. The persons owning the forests should be compensated with funds meant for the preservation of environment.

Pakistan is not short on natural resources and natural wealth. Dearth of efficient planning and execution has been the cause of our poverty and miseries. We have been penny wise and pound foolish throughout.. only looking at short term benefits like a hen looking to peck a grain in front of it, oblivious of everything else. Let us hope sanity picks up and managers of the country look to manage it properly. .. CN report, 20 Dec 2021