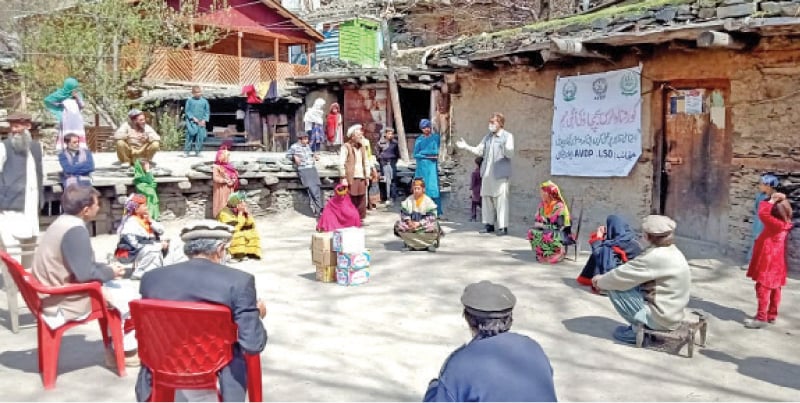 CHITRAL: Volunteers working under the local support organisations (LSOs) have been playing a key role in creating awareness among the people of Khot valley of Upper Chitral about coronavirus.

The volunteers have been visiting the valley for last 13 days to disseminate knowledge about the deadly virus ensuring that they reached each person of the targeted village.

The women members of the group have also approached their gender and children, sensitising them to the infection.

These awareness sessions have resulted in the villagers having started producing own masks and sanitisers. They are also ensuring that no outsider entered their villages.

They have started guarding the houses of the affected persons round-the-clock to ensure they do not leave their rooms before the mandatory 14-day quarantine period.

The precautionary measures against the virus are found to be at their fingertips due to the frequent orientation sessions conducted by the volunteers. Large-sized banners and posters can be seen in every village creating awareness about the virus and the responsibilities of individuals.

Maintaining social distancing is hardly a problem in the villages now. Any violation of the rules is likened to social taboo.

All these achievements were accomplished by the community members on their own expense. The villagers are now also helping the poor and the daily wagers affected by the lockdown.

Seeking contributions from the affluent and reaching the poor in an organised way is yet another valuable contribution of the community activists.

All these concerted efforts are the outcome of the local support organisations in each union council registered under the Companies’ Ordinance of 1984.

Primarily organised by the Aga Khan Rural Support Programme, they have a strong governance system consisting of board of directors appointed by the general body members, and each office holder is the representative of his mohallah or village.

When the hazard of coronavirus loomed large over Chitral, these LSOs were prompt in devising a strategy to cope with the threat using their own financial resources and the workforce.

Rehmat Elahi, the chairman of Ayun and Kalash valleys development programme, said all the LSOs throughout Chitral responded vigorously to the situation depending solely on their own resources. He said the LSOs’ role in rural development since 1990s had been critical.

Mr Elahi said these bodies were likely to play crucial role in governance in near future.

District health officer Dr Haiderul Mulk said the zero transmission of Covid-19 locally could be attributed to the community’s practical approach towards the crisis.  .. Source