The Pied Piper of Hamelin

The town of Hamlyn was once full of rats.. The people had grown tired of the rats but were unable to do anything. Even the cats were not able to kill the rats.

One day, a queer fellow, came to town. He was called the Pied Piper. He went to the Mayor and asked him, “What will you pay me if I free your town of every single rat?” The mayor offered fifty pounds to the Pied Piper.

Happy with the offer, the Pied Piper started playing his pipe. Hearing the shrill, keen note, every rat came out from its hole and started following him. The Pied Piper kept on playing his pipe and the rats followed him. The piper walked up to the harbour with millions of rats behind him and led them into the water and waited till every rat had drowned. 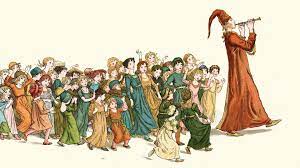 Now the town was free of the little devils and the people were very happy.

After all the rats were dead, the Pied Piper returned and asked the Mayor for his money. The Mayor said that he could only give him twenty pounds for such an easy job. Now that the rats were dead, the Mayor thought that there was nothing to worry about. But the Pied Piper wanted to teach him a lesson. This time he played a different tune. Hearing his music, the children came out of their houses. They started following the piper, dancing and shouting. The elders watched in disbelief as the Pied Piper led the children far, far away. The Mayor sent his men to look for the piper and bring the children back but none could find the lost children.

The many detractors of Zulfiqar Ali Bhutto allege that he made the people aware of their rights but not of their responsibilities. The result was a chaotic condition and social dishevel in the country.

Imran Khan has aroused the sentiments and emotions of the people, but will he be able to channelize them into productive formation or let them go unbridled (which can be disastrous). The Chitrali idiom well says “Pari khameik asqaan, usnaik geran” (easy to  let out the Jinnie but difficult to put it back in the bottle).

The huge following of Imran Khan playing to the tune of emotions shows the frustration in the society at large, the emotional fragility of the society and more ever so, the soaring and unbridled population of the country, all which need to be addressed on priority basis. .. CN report, 17 Apr 2022

5 thoughts on “The Pied Piper of Hamelin”