Sunni Ismaili agree on austerity in marriage and mourning rituals 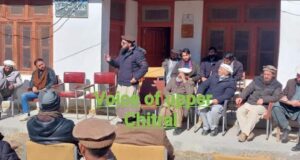 CHITRAL : After the village of Laspur, residents of another village in Upper Chitral, i.e. Chinar Mastuj, have collectively decided to observe austerity and simplicity on the occasion of marriages and death mourning’s in the area. The decision was taken at a meeting of the religious, social and political elders of both communities of the village, which is a good augury for the health of communal harmony. The initiative for simplicity and austerity is a desire of HH Prince Karim Aga Khan and the regional councils are trying to implement it. Sunni community is also being positively influenced by this beneficent and much needed movement.  It is hoped that this positive mindset influences not only Chitral, but the whole country. .. Meraj Hussain (voice of upper chitral)