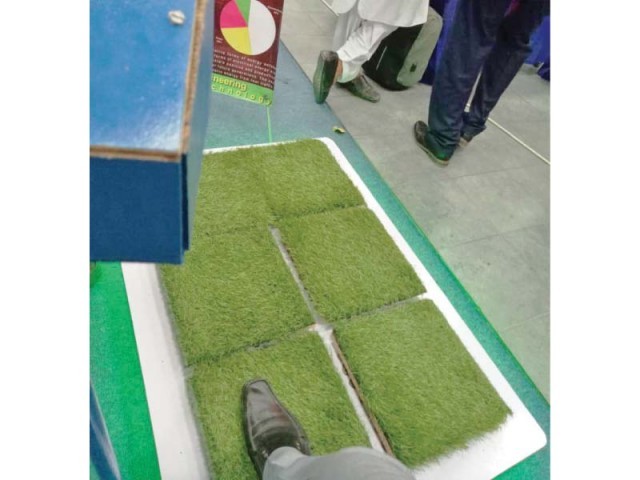 Students have created tiles which convert mechanical energy into electrical energy and generate electricity. The electricity produced can be stored in a battery to power appliances later. PHOTO: EXPRESS

Karachi: Three engineering students from Iqra University have devised a mechanism for producing electricity through walking.

Calling it ?energy harvesting?, Ghalib Nadeem, Hafiz Waleed and Ali Akbar, have developed tiles using wood and artificial glass, which generate electricity when stepped on. The electricity produced can be stored in a battery for powering appliances as and when required.

According to Nadeem, the tiles convert kinetic energy into electrical energy and if installed over an area of 300 metres, these have the capacity to generate electricity sufficient for charging seven to eight batteries of UPS in two hours.

Speaking to The Express Tribune, Nadeem said that the team came up with the idea for the project keeping in view the electricity crisis in Pakistan and managed to complete its execution in two years? time. He further said that similar projects have been executed in London, Russia, China and other countries but nothing of this sort had been done in Pakistan.

The tiles have been designed using locally manufactured components, which has kept the cost of the project low, bringing it in easy access of many.

Moreover, these tiles are environment-friendly, only need to be installed once and entail no maintenance cost.

According to Nadeem, these tiles can be installed in markets, parks, walking tracks and other places to generate many hundred watts of electricity, which can contribute towards overcoming the electricity shortfall in the country.

Responding to a question, he said that talks are underway with some interested parties for the practical implementation of the project.

He informed that Rs125,000 are required for the implementation after which free electricity can be produced for unlimited period of time.?? .. Source