Religious harmony at best in Chitral

CHITRAL: Chitral has always seen a healthy atmosphere of religious harmony between the majority muslims and minority Kalash faith.  Chitral has seen Kalash ruling the area at a point in time in history and even then there is no recorded evidence of animosity between 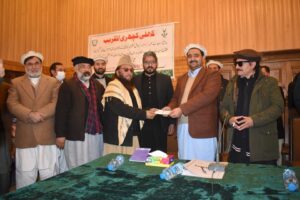 the two faiths. The Muslim rulers reigning the area over centuries also did not try to tease or convert the Kalash by force. This religious harmony in Chitral even survived the difficult days of extremism and militancy of the previous decades during Musharraf era.

The rise of a Kalash politician Wazirzada to the rank of an Advisor to the Chief Minister of the province was also welcomed by the Chitrali clergy. Now the event of distribution of honorarium to Muslim clergy by the Kalash politician is a good sign of softening up of thinking about tolerance cohesion and harmony. .. CN report, 15 Dec 2021

3 thoughts on “Religious harmony at best in Chitral”