Reflection on a visit to Saudi Arabia for Umra

Having been granted the opportunity by Amighty Allah to offer Umra at Holy Macca and visit Madina to pray at the Holy Prophet’s mosque, have just returned after concluding the spiritual trip, and thought to put my observations on record. 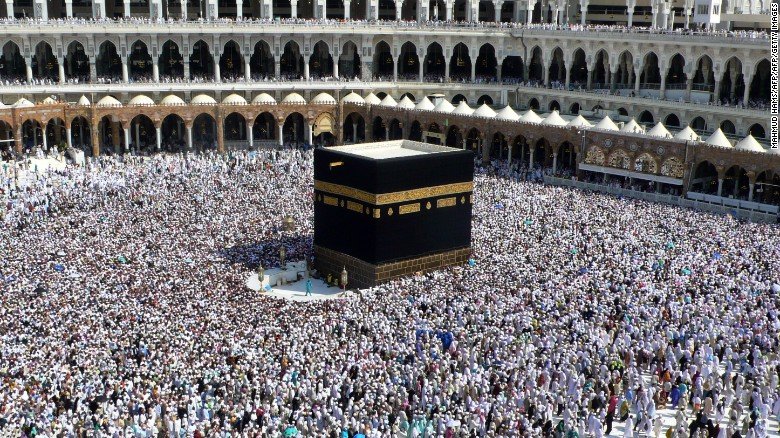 The most gleaming observation of the visit was the display of unimaginable emotional reverence for the holy Kaaba and at the Masjid Nabvi. From the Hotel room overlooking the Kaaba one could see tens of thousands of worshippers observing the ritual of going round the Kaaba paying tawaf. This scene was witnessed round the clock, non stop, whether in sizzling sunshine heat or at the middle of the night. It looked like a perpetual and non stop sea of humans from all over the world in all hues and shades even including converted white skinned westerners paying their respect buoyantly without getting tired or wanting to rest. The same spirit could be seen at the Prophet’s (PBUH) mosque in Medina. People trying to approach the grave (Roza) of the Holy Prophet would get frenzical and burst into cries showering respect upon the Prophet (PBUH).

The unfathomable spirit of attraction and the frantic reverence Muslims from all over the world have for their religion, triggered an involuntary thought in my mind as to the tremendously potent platform Allah Almighty has provided the muslims to focus on at one place and one belief. This potential platform could be used practically to bring about goodness in a troubled world.

While offering my religious ritual I prayed to God to make this platform a source of betterment for the whole world. I prayed “Almighty Allah, make the Muslims become a source of goodness to the world. If they can sacrifice their time, money, comfort and come to worship You here, make them follow your path – The path of peace, compassion, tolerance, rightfulness, truthfulness, humility and love for humanity and Allah’s creation”.

Whereas the general experience and feeling during the Umra and ibadahs were very pleasant and refreshing, at least at one point I was very sad and dissapointed. While making Tawaf of Holy Kaaba, suddenly heard some voices other than the prayer verses. It was of uniformed guards who were escorting a group of about a dozen pilgrims doing Umra. The guards were shooing and even pushing other pilgrims away to make way for the group. It was clearly a sight of VIP Umra being carried out. We have always been taught that in the eyes of Allah Almighty all humans are equal and more so in a mosque. Discrimination of this kind is totally against the spirit of Islamic teachings. I said to myself, in a western civilised country even a man in the street is given the same respect as any body else, but here, in the house of Allah, such ugly discrimination is being displayed by the organizers of the place.

For the positive observations one was that large amounts of pilgrims from Indonesia /Malaysia etc were pouring in every day. On query was told that in these countries the government sends every adult muslim on Umra at govt expense once in a life time and multiple umras /haj? are banned. One could see the poorest of poor from these countries enjoying Umra privilege. What a beautiful idea, I thought. Why can’t it be done in Pakistan. Only one Umra/Haj at government expense should be the right of every citizen. No citizen should be allowed to perform more than one Haj and one Umra and that too with at least three years gap. If a person has too much money and wants to use it for Haj and Umra, he can donate it to the government who is giving the Haj/Umra facility to every citizen.

The population of pilgrims at Kaaba is increasing rapidly and seems will get out of control in few years. The apparent response/measures do not look adequate and adhocism in management still visibly prevailing there. Drastic measures on scientific grounds need to be adopted to keep the flow of pilgrims controlled and regulated before things get out of hand.

The arrangements at Airport in Jeddah and Madina both on arrival and departure are pathetic. Pilgrims are given the last priority and Airport procedures take five to six hours because of the inefficient system. Many pilgrims are old, sick or infirm and there is no consideration for them. The Haj terminal at Jeddah airport resembles a large warehouse building with rough cement flooring, no escalators or elevators. No announcements are made and one has to guess or ask attendants about flights, boarding gates etc. When I asked a PIA employee as to why no announcement about flight boarding was made, he replied “without announcement there is so much rush, imagine what will happen if we make announcement”.

In the PIA aircraft even in an economy-plus (business) class, the service was substandard. There were bearded flight stewards (one with grey beard). The stewards and hostesses handed over food tray to the passengers in haste, collected it soon after and then disappeared to be seen only before landing to remind us to tie up seat belts.

Before departure our travel agent had forewarned us that there would be administrative disappointments. His words were ” As you are going there to get your sins forgiven, be ready to face difficulties on the way” to which I had replied “I am ready to bear difficulties in the path of Allah, but I am not going for getting my sins forgiven, nor will they be forgiven if they are sins against ‘huqooq ul ibaad’. After which he wished us well and said good bye. .. Wg Cdr (r) Fardad Ali Shah, 09 Apr 2018