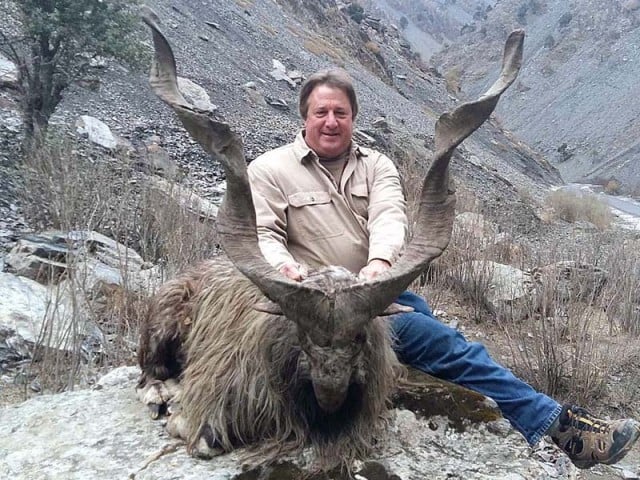 PESHAWAR😕The provincial government has issued three licenses for the hunt of Markhor for Rs30 million.

The licence to kill the protected majestic animal has been granted under the trophy hunting policy where the provincial government keeps 30 per cent of the proceeds and 70 per cent goes to the local community where the hunt takes place.

The scheme has attracted foreign hunters willing to pay hefty sums for an adventure of a lifetime.

Source said that the licenses for hunting Markhors were issued to a local company which paid Rs10 million each for three trophies.

The company will in turn sell the right to people in US and Europe on much higher rates, that too in dollars. The foreign hunters are expected next year in spring, the source said.

The Wildlife Department issues the permit and designates the hunting ground where the local community identifies the animal, usually an overaged male with big horns, which may be be hunted.

The trophy hunting was introduced in 1999 as a means of conservation. Instead of allowing people to hunt the majestic Markhor to extinctions, people were encouraged to protect it and allow only selected people paying the right price to hunt it.

From near extinction, sources said, the Markhor population was now reported to be almost 30,000 heads.

In K-P, Markhors are hunted in the rugged mountainous areas of Chitral and Kohistan. As per agreement, 70 per cent of the income generated from Markhor trophy hunt? is being spent on local population, construction and development and 20 per cent becomes part of the national treasure.

Hunt of female animal is absolutely banned to retain the breed, while the age of the rare animal has to be considered during the hunt. Before hunt, hunters are briefed about their target.

The age of Markhor is determined by its horns, the older males have bigger ones therefore are more appropriate for a trophy. This keeps young and virile males out of the hunters? gun sights.

The guests are allowed to take back the trophy head and pelt under official permit facilitating easy movement across customs at airports.

The community of hunters around the world considers Markhor trophy an honour as it is found in most the dangerous and rugged terrain of the country.?