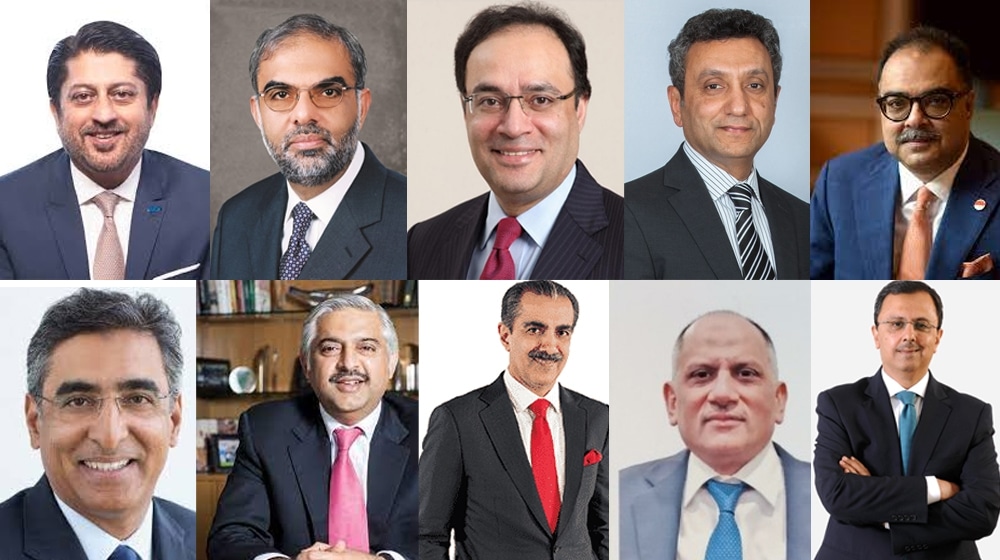 Pakistan’s banking sector remains progressive and profitable despite the critical challenges to its economy. Inflationary pressure and external sector payments risks are the key causes of building macroeconomic imbalances in the country

Here is an overview of Pakistan’s top bankers and their salaries.

The CEO and President of United Bank Limited (UBL), Shahzad Dada, is the highest-paid banker in the country. He drew an overall income of Rs. 340 million in 2021, including a salary of Rs. 232 million and a special reward of Rs. 108 million.

He took charge of the bank last year, replacing Sima Kamal, who is now the Deputy Governor of the State Bank of Pakistan. Under his brief leadership, UBL’s profit surged by a staggering Rs. 10 billion to reach Rs. 30.6 billion in 2021. It also improved its ranking from fifth place to third in terms of profit with a very close competition with MCB Bank which recorded a profit of Rs. 30.8 billion in the same year.

Dada has spent a longer period in foreign banks, including Barclays Bank and Deutsche Bank, and came into the limelight as one of the top bankers within a few years. He joined Standard Chartered Bank in 2014 and led it toward phenomenal growth in terms of profitability and operational growth during his stay until the mid of 2020

The CEO and President of Meezan Bank, Irfan Siddiqui, is the highest-paid Islamic banker in Pakistan who reportedly drew an annual salary of Rs. 306 million last year as compared to Rs. 275 million salary package in 2020 and also received an annual raise of Rs. 31 million from the bank.

His endeavors translated well into the sustainable growth of leading Islamic banks but his contribution to the growth of the Islamic banking industry in the country is remarkable. Starting from scratch, Meezan Bank acquired various financial institutions, including Société Générale, HSBC Pakistan, and HSBC Oman. It also achieved various benchmarks, including its assets value and deposit mobilization.

Meezan Bank made the highest-ever profit of Rs. 28.2 billion in 2021, with double-digit growth of 17 percent year-on-year (YoY).

Muhammad Aurangzeb is the CEO and President of Pakistan’s biggest bank — Habib Bank Limited. In the last few years, he used to be the most expensive banker in the banking industry but ranked number 3 in terms of a salary package of Rs. 265 million that he had drawn from the bank in 2021 against an income of Rs. 222 million in 2020.

Aurangzeb’s aggressive focus on digital, SMEs, and agriculture financing should be followed by different banks as well. In 2021, his bank retained its position as the most profitable bank in the country, with its balance sheet reporting the highest-ever profit in the industry — Rs. 35.5 billion with an annual growth of 15 percent.

Of course, his rich experience in the global banking and the financial sector is making a difference in the local banking industry but customers angrily ask him if this is the quality of service one should expect from the country’s leading bank.

Imran Maqbool, the retiring CEO and President of MCB Bank is on the list of the top five highest-paid bankers in Pakistan. He drew an annual income of Rs. 235 million in 2021, which is Rs. 108 million or 85 percent higher than the salary he received from the bank in 2020, which was Rs. 127 million. The astronomical rise in income was apparently a good gesture from the bank in recognition of his dedicated services.

In the last year of his service, the bank made an all-time high profit of Rs. 30.8 billion, with a modest year-on-year growth of 6.2 percent. During his tenure, MCB Bank had become the most profitable bank for two straight years — 2018 and 2019. In the subsequent years, it had been among the top three most profitable banks in the country.

Maqbool had served Meezan Bank and its associated companies since 2002 in different capacities. He remained its top banker for nearly a decade and spearheaded successful initiatives for banks, including the merger with the NIB Bank, the launch of the Sri Lankan operations, supervision of the Asset Management Groups, and the establishment of MCB Islamic Bank as a subsidiary.

Contrary to the growth in his salary, SCB did not sustain its position in terms of profit growth. Shaikh joined the bank a year and a half ago and the bank’s position dropped from sixth in 2019 to ninth in 2021. SCB left many of the competing banks in the dust under its then-CEO, Shahzad Dada.

The President and CEO of Bank Alfalah, Atif Aslam Bajwa, is an old guard of the bank who has been reappointed as its top banker after a term of 3 years.

Bajwa’s annual salary package is incredible. He drew an annual income of Rs. 187 million in 2021, along with perks and benefits, and drove the bank towards profitability and innovation again.

In 2021, Bank Alfalah posted a profit after tax of Rs. 14.217 billion in 2021 as compared to Rs. 10.475 billion that it reported last year, which was a significant improvement of 35.8 percent YoY. The bank regained its position among the top 10 profitable banks in the country, with its ranking increasing to eighth in 2021 from eleventh in 2020.

Mohsin Nathani, the President and CEO of Habib Metropolitan Bank, is one of the most experienced bankers in Pakistan who deserves to be well-paid. Under his management, the bank reported its highest-ever profit of Rs. 12 billion, with a staggering growth of 82 percent YoY.  His income in 2021 was Rs. 144 million, which was Rs. 20 million higher than in 2020.

Mansoor Ali Khan has been the CEO and President of Bank Al Habib since 2016 and has maintained a low profile in the banking industry but has kept the bank on the path of sustainable growth and expansion.

In 2021, Bank Al Habib Limited improved its ranking from the seventh-most profitable bank in 2020 to sixth place in 2021. It posted a profit after tax of Rs. 18.70 billion, showing a modest increase of five percent as compared to the previous year.

Bank Al Habib continued with its strategy for outreach expansion, adding 107 branches in 2021 with handsome investment. Khan made an annual income of Rs. 128 million in 2021, which is merely Rs. 4 million higher than his income in 2020.

Yousaf Hussain is the CEO and President of Faysal Bank, and has been associated with it since 2008, and became its CEO and President in 2017. Under his leadership, the bank successfully transformed its bank mode from a conventional system to Sharia-complaint, and Faysal Bank is close to completing its full conversion to Islamic banking in a few months.

Last year, Faysal Bank posted its highest-ever profit of Rs. 8 billion with a staggering growth of 25 percent YOY in profitability. Hussain made an annual income of Rs. 137 million, which was Rs. 17 million higher than his income in 2020.

Zafar Masud, the CEO and President of the Bank of Punjab, is a miracle man for many reasons. Under his management, the bank posted a yearly growth of 79 percent in 2021 and made a profit of Rs. 12.4 billion against its profit of Rs. 6.9 billion reported in 2020.

While Masud is leading a public sector bank, his initiatives are aggressive, particularly in terms of partnerships with various companies for improvements in operations and expanding the businesses. In 2021, he made an annual income of Rs. 134 million along with perks and benefits.