Pakistan; IMF is complicit in the crime!

CHITRAL: There are two distinct opinions regarding the IMF giving loans upon loans to Pakistan. One opinion is that the IMF is a culprit and it has enslaved us by giving loans to us which they know we cannot pay back. The second opinion is that the IMF is our benefactor which helps us in hard times and it is our rulers who squander the money. They absolve the IMF of any wrong doing on their part. 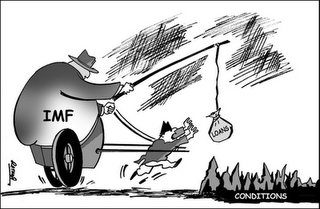 The matter of fact is that, no doubt the IMF gives us loans when we beg for it. It is also a fact that our rulers squander this money instead of using it judiciously. But the question is ‘why does the IMF dictate terms on which the loan is given’? If at all they have to dictate, why don’t they be objective and honest about it it.? Why is it that the IMF always wants our governments to increase the price of fuel, energy and commodities? Why don’t they ever demand of the government to reduce their overhead expenditures and squandering of their loan. Why don’t they demand reduction in the gross imbalance in the Defence budget vs education, health and welfare budget allocation? Why do they tacitly allow the rulers to loot the country and keep the country in permanent chains of debt slavery. The IMF should either stop giving loans to Pakistan or they should not impose any conditions on it or if they impose conditions like they are doing now, the conditions should be judicious and fair.

The IMF needs a revisit of it’s policy towards Pakistan which is their captive slave in the form of a perpetual loan seeker. It needs to impose conditions such as reduction in the overhead expenditures of the government by 70 percent to begin with. To reduce the non combat overhead expenditure of the armed force by 70 percent. To finish off the snowballing pension system with one time lumpsome payment at the time of retirements.

Instead of burdening the poor man with making life difficult, the IMF should catch the bull by the horns. The Pakistani nation is used to being governed by force. Honest and benevolent force is the best medicine for us. IMF can exercise this force through it’s economic muscle and our economic frailty. .. CN report, 02 July 2022

2 thoughts on “Pakistan; IMF is complicit in the crime!”