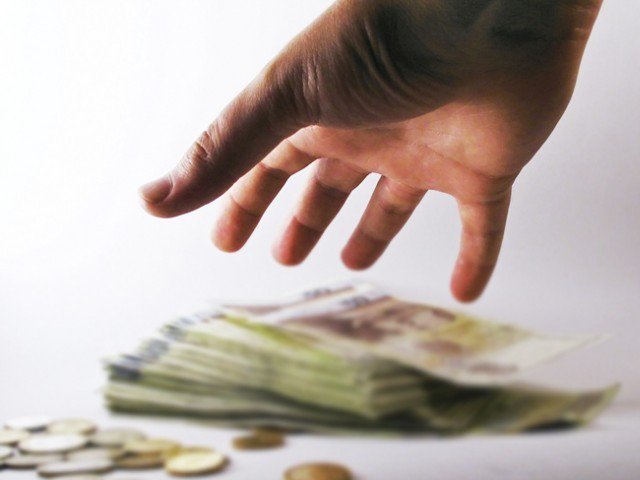 PESHAWAR:?The Khyber-Pakhtunkhwa (K-P) finance department claims to have stumbled upon around Rs82 billion that was stashed in private banks, in accounts designated to different departments.

The finance department claims to have no prior knowledge of these funds and in a bid to clarify the department?s position, K-P finance secretary Shakeel Qadir Khan gave a press conference at Civil Officers Mess, in Peshawar, on Wednesday.

Khan said that several of the K-P government departments are autonomous bodies that are legally allowed to possess accounts in private banks.

He explained that the government releases funds from a central account, called ?account one? which are then put into these private accounts for the relevant departments.

Deeming it a system failure, he said the money that was released was not tracked, and that the government departments should have reported back to the finance department about whether or not the money was spent.

The funding released for development in the past was thus still in private bank accounts, completely under the government fund transfer system?s radar.

Khan also informed the press that the local government has the highest number of designated accounts with unspent money. Although he was unsure of the exact number of accounts, he said that 6,500 accounts have been identified. Of them, 4,500 were at the Bank of Khyber, while the rest of the 2,000 in other private banks. He added that he has requested the State Bank of Pakistan to provide the account numbers. In addition, the sums of money in these accounts come to a staggering Rs172 billion.

?We are investigating the matter and are hoping that by the end of December the process will be complete and we will be able to utilise the money,? he said. Khan said that since the matter involved both private banks and the State Bank of Pakistan, the process has become longer, or they would have reversed the transaction to add it to the government?s fund.

?Out of the total Rs172 billion, we are focusing on Rs82 billion as the remaining money, Rs90 billion, will be invested into pensions, hydel power plant payments and provident funds,? he said. He also said that they expect to add at least Rs30 billion to the government?s funds after the investigation.

He hoped that after the addition of this amount, the K-P government will be able to come out of the deficit. He admitted that there were no signs of embezzlement, reiterating that it was a system failure, as well as a collective failure on the part of the finance department, the account general?s office, the audit department and all other departments concerned.

Khan also informed the press that the government has already saved Rs six billion, as the departments concerned have been told to use this newly discovered stash of money, instead of releasing new funds.

The finance secretary had expressed concern over K-P?s financial crisis during the last quarter of the year, owing to the delay in release of funds from the federal government.

?On 30th October we recorded a deficit of Rs32 billion in the Net Hydel Profit (NHP) transfers,? he said, adding that Rs32 billion is a huge shortfall during the first four months of the fiscal year.

?The funds required for the NHP in the current fiscal year are mentioned as Rs35 billion in our budget, while the federal government has not even transferred the Rs16.8 billion remaining from last year. This leaves us at a deficit of RsRs52 billion, which will come to bite us at the end of this year.?

He explained that the federal government has delayed the NHP transfer as WAPDA and the Central Power Purchasing Agency could not approach NEPRA in time to file tariff petitions, which would, in turn, enable the K-P government to receive the annual amount agreed upon between the local and federal governments.

The finance secretary said that although K-P is doing better than the other provinces financially, if the NHP money is not released soon, it will face a financial crisis and will have to cut down development budgets.

Khan also said that they are making some changes to pension rules to accommodate growing pension liabilities and will try and convince serving government employees to contribute towards the pension funds from their salaries.

?We are paying off pensions from our tax receipts and the amounts have now started to exceed the budget,? he said, adding that this issue is a serious one as it directly affects the developmental portfolio. ?In 2001-02, the pensions would amount to Rs one billion. Now the amount comes to around Rs53 billion and it is estimated to reach Rs172 billion by 2027,? he said, adding that they are verifying pensioner data and have sent 135,000 pensioners accounts to NADRA for verification so that ghost pensioners can be eliminated.