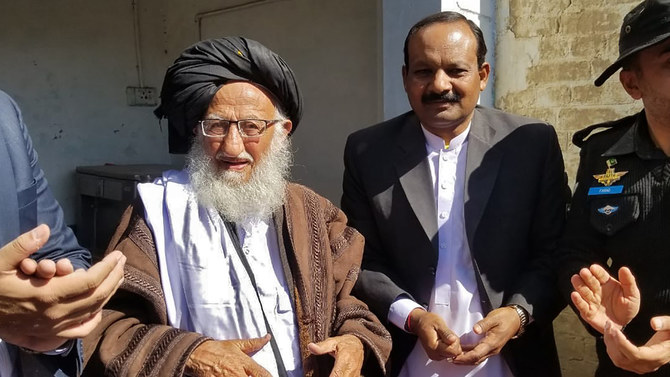 Maulana Allah Dad, a cleric (left), handed over an old temple to the Hindu community in Zhob, Balochistan, on Thursday, February 6, 2020. The temple was converted into a school soon after the partition of Subcontinent in 1947. (Photo Supplied) 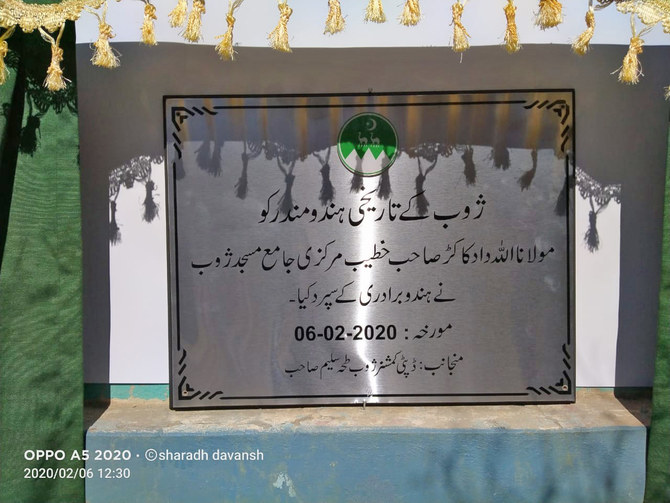 Authorities in southwest Pakistan handed over an old temple to the Hindu community in Zhob, Balochistan, on Thursday, February 6, 2020. The temple was converted into a school soon after the partition of Subcontinent in 1947.
In a grand gesture of inter-faith harmony, a Muslim prayer leader invited Hindus back to their worship placeAround 60 Hindu families live in the Muslim-majority district of Zhob near the Pak-Afghan border

ISLAMABAD: The Hindu community in Balochistan?s Zhob district deeply appreciated the provincial administration after it handed them back an old temple in a heartwarming gesture on Thursday.
One of the top Hindu leaders of the area said it was a great moment of excitement when a Muslim cleric invited his community members back to the 200-year-old temple by unveiling a commemorative plaque in a well-attended ceremony.

?I cannot express the happiness of my community in words,? Saleem Jan, a Hindu based in Zhob, told Arab News on phone from his hometown near the Pak-Afghan border on Friday. ?It is always great to get back one?s worship place, but when an Islamic prayer leader opens it for his Hindu fellows it becomes a huge honor and a great gesture of interfaith harmony.?

He added that the event, where a local cleric, Allah Daad Kakar, handed over the temple to Hindus, was attended by officials and representatives of different political and religious parties. Deputy Commissioner Zhob Taha Saleem, who was also the chief guest at the occasion, said that the gesture was significant for several reasons.

?Balochistan is thought to be a volatile and dangerous territory, especially for the religious minorities, but different events, including this one, tell us a different story: It?s a story of a province where people are considered brothers regardless of their faith,? Saleem told Arab News, adding the second significant aspect of the development was the presence of all political parties, including Jamiat-e-Ulama-e-Islam and Jamaat-e-Islami.

Saleem said a school had been set up in the temple after a chunk of Hindu population left for India in the wake of the partition of the region in 1947. ?While the locals established a school in the building, they did not touch the original structure. Once again, this says a great deal about the interfaith harmony in the area,? the official said, adding the school had now been shifted to government offices meant for local administration officials.
The deputy commissioner said a plaque at the gate of the temple had 1929 written on it, implying that the temple was about 100 years old. However, the Hindu community leader, Jan, claimed it was twice as old since the gate was constructed almost a century after the temple was built in the last part of the Maratha reign.
The community, which has been using another small temple in the town for rituals and worship, urged the authorities to do more.

They noted that officials had also assured them to recover a Sikh Gurdwara in the city. ?This will fulfil the dreams for around six Sikh families living here,? Jan said, adding that the Hindu community had also been deprived of the Shamshan Ghat ? or the cremation ground ? for over 70 years.

?A high school has been built on the Shamshan Gath,? Jan said. ?Members of the Hindu community have to take their deceased family members to Quetta for cremation.?
However, he added that the local community did not want to relocate another education institution at this stage.
?We have been promised a different place for Shamshan Gath, and we are happy with that,? he said, adding his community members were also hopeful to get a residential colony.

This demonstration of interfaith harmony, he said, was not alien to the community.
?We defied terrorists by sticking together during the days of intense violence,? Jan recalled. ?Hindus and Muslims in our area have been joining each other in moments of happiness and mourning. Muslims celebrate our festivals and we celebrate theirs.?? .. Source

One thought on “Inter faith harmony: Cleric hands over temple to Hindus”