Tea is one of the essential items of our breakfast and we take it wherever and whenever it is presented beside buying it at restaurants. When I was about 10 years old, many people including women were over fond of this product which came to Chitral market from over the Lowari Pass by Paracha traders. Before I was 10, I used to see tea in front of my grand father who was then a very old man and had used tea in the Mahraka of rulers and princes and so had brought it to his home and enjoyed it at about 9.00am. I and a cousin of mine used to be ready for the tea time of the old man. It was brought to him in porcelain tea pot with two cups on a tray. We coveted it. Sugar was then not very common but the old man always had some stock of it but when not available Gurh was used. He also served his tea to his guests who came from different places including his relatives. We got some tea each from our kind grand father every day at the time of his breakfast. We did not covet his food but showed impatience for a sip of the tea and this made us used to it but when we were sent to primary school early in the morning before the old man rose, the routine broke. 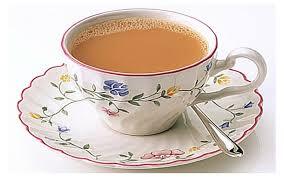 Once , in the later days, I asked an old notable about the arrival of tea in the villages of Chitral and the notable replied that he had no correct information about its arrival in Chitral but it is not very old . He said ‘it was not known in the days when I was a Child’ but I did not argue with him over this point there and then but I still disagree with his point that Baba Siar of Shogram has used the word Chai in his famous lyric called Yarman Hameen. He says ‘ ta shun chayo muxosher tahosta chini namakin yarei’ At the time of Mirza Muhammad Siar ‘chai’ was known in this part of Asia. He has used the delicate poetic word to depict the beauty of sipping tea from a porcelain cup by his sweetheart. So the history goes back to Baba Siar which was in the early 19th century. Tea that we call chai is also called chai in many other parts of the world. Ibne Insha writes in one of his popular travelogues that in Moscow the word chai is used as we use it here in the sub continent. It has also become a word of Russian language.

Chai has got certain chemicals like caffeine which is toxic like tobacco but albeit less complex than the latter. It gives refreshment after physical exertion. In the past it used to be pure tea leaves and highly aromatic which could be smelled from considerable distance. It was then imported and brought to Chitral. The rate was fixed. Once prices of tea rose in the shops of Chitral- then dominated by Hindus, in the days of HH Shuja ul Mulk, he took notice of the price hike and sent telegram to the Tea trading Co. in India and the reply came to him that due to a strike by the tea labour force in the tea gardens the wages of the workers have been raised and for that reason the price has risen. This action taken by HH Shuja ul Mulk has written record in the archives library. I request for feed back on this topic. .. Prof Rahmat Karim Beg, Chitral 04 Sep 2021

People who get less than eight hours of sleep a night are more likely to suffer from depression and anxiety,