CHITRAL: A simple celebratory event was organized in Chitral town to honor the successful climbing of the rocky massif of the Saraghrar Peak (4349m) for the first time by a Georgian Expedition led by Archi Badriashili with Mr. Baqar Gelashvili and Mr. Giorgi Tepnadze in his team. They also climbed Languta-e-Barfe (6,827m) in the Terich valley in three days times.

They are prominent Georgian climbers, who have climbed many peaks in the Caucuses, the Swiss Alp, Tien Shen in Kyrgyzstan, Nanga Parbat in the Himalayan Range, besides Nepal and Eastern Europe.

They reached the peak by 15:30hrs on September 10, 2021, and safely returned to the basecamp to celebrate the achievement and relax before continue traveling back to Chitral town. The team also made an ascent of Languta-e-Barfi (6,827m).

The successful climb of the Georgian Expedition was possible because of their fitness, regular practice, and relevant 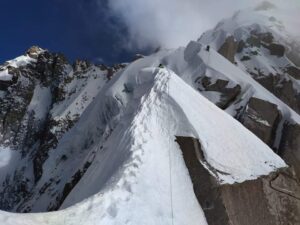 experience in climbing difficult mountains. During an interview, the team leader informed: “the NW phase of the Saraghrar peak is a steep wall involving technical difficulties for climbers. It rises at 90 degrees from the ground, we are so glad that we made it to this unclimbed peak”.

The team further informed that they had reached Chitral on August 16, 2021. From the Terich valley, they hired 20 porters to carry their luggage to the basecamps. They did not have High Altitude Porters (HAP), rather they carried their own luggage whilst making it to the peak on September 10, 2021, at 15:30hrs.

Terichmir Travel facilitated the expedition, and Mr. Hussain Ahmed, the energetic young man of the company assiduously fulfilled his responsibilities to ensure the comfort of the group members. The efforts of Terichmir Travels and Mr. Hussain to promote adventure tourism/ mountaineering in Chitral deserve appreciation and acknowledgment.

In their interview with this scribe, the expedition members admired the hospitality and treatment of the locals in the Terich Valley and other parts of Chitral. They said that adventure tourists should not hesitate to come to Chitral and climb the beautiful peaks in the Hindukush region. They further added they were at home and comfortable throughout their stay in Chitral, Pakistan. .. by Shamsuddin, Chitral 23 Sep 2021