CHITRAL: Former prime minister Imran Khan has emerged as a personality who has attracted the attention of people of Pakistan like no one else before- not even the charismatic ZA Bhutto.

The youth of Pakistan are following him blindly and are ready to do whatever he says. A jobless youth, an ardent worker of PTI, talking to Chitral News swore that he is ready to tie a bomb to himself and go wherever Imran Khan ordered him to. When asked if Imran Khan asked him to do manual labour to earn an honest living instead of wasting his life sloganeering, would he do it?. The youngster replied saying although he doesn’t like manual labour and considers it below his dignity doing it, but would be ready to do that on Imran’s orders. This is the kind of following Imran Khan has amongst the youth of Pakistan, as of today. 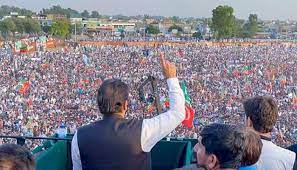 Politics aside, if Imran Khan asks the youth of Pakistan to engage themselves productively for the benefit of themselves and the country, it would be a great favour to the young generation and this nation. If he urges upon the youth to become honest, disciplined, sober and responsible in their daily lives, the youngsters would readily pay heed to it and he would do a service to the nation more valuable than asking them to get rid of the slavery of the US etc etc. because even if they get rid of America, they are still in the shackles of a more serious slavery i.e wasting their lives in waywardness without any direction, not practicing a hardworking, honest and disciplined life, looking for short cuts and quick fixes and not knowing the priorities of being good human beings and good citizens. If Imran Khan Khan stresses upon these life changing factors for the youth it will automatically put them in a position to be free of any slavery, whether American or local political slavery. If only Imran Khan uses half of his energies and efforts that he uses against his political opponents, to reform the character and mindset of the youth, they will automatically reject corruption and negativity of the opposition or whoever, without any need of his spitting fire against them.

Imran Khan has a God gifted chance. He can use it or waste it. Political expediencies are temporary and fade away sooner or later but national character building will be a service that will make him a leader and a hero. .. CN report, 15 May 2022