Dishonesty in our society starts at birth!

CHITRAL: When this scribe tried wish a friend on his birthday as posted on facebook, he replied that this was his birthday on papers, whereas his  actual birth date was something else. The Pakistani society comprising of 97 percent Muslims is plagued with the ill of dishonesty right from his/her birthday. Any where you go and every where you look, absence of honesty is clearly visible around. The journey of dishonesty starting from the birth date continues throughout his/her life (Noble exceptions aside). 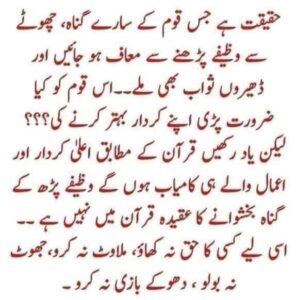 As we progress we make wrong declarations, keep telling lies everyday as if it is a normal matter, display hypocrisy and indulge in cheating with impunity and continue our lives like this till we are no more capable of doing anything and then we ask Allah for forgivance. One big factor for the moral morass that the society suffers is failure of our religious preachers to emphasise on the importance of honesty and truthfulness (Sadaqat and Amanat), the primary character strength of our Holy Prophet (PBUH).

The pity is that religious preachers instead of preaching abstinence from sins, teach people ‘wazaif’ and rituals to ‘delete’ sins from their life  history. There is though a sect of Islam (Ibadia) which believes that major sins including those against huqooq ul ibaad (humanity) cannot be forgiven with prayers and the sinner will forever suffer in hell. Majority of this sect resides in Oman and those visiting there, say that Islam is at it’s best vis-à-vis the rate of crime is minimal in their area.

Ulema and religious preachers from all sects of Islam must preach that sins cannot be eliminated with prayers and rituals and the sinner will in any case suffer punishment in hell for it. In that way Muslims will abstain from committing sins instead of banking on prayers, wazaif, Haj, Umra for annulling their sins. .. CN report, 06 Apr 2022