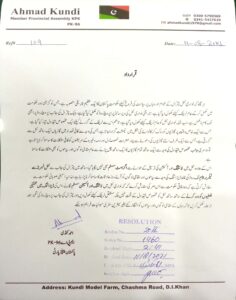 CHITRAL: Ahmad Kundi, Member Provincial Assembly from Dera Ismail khan, belonging to the PPP, has moved a resolution in the assembly against the uncalled for closure of the Lowari tunnel at frequent intervals during the whole day and having three hours ‘tunnel break closure’ from 12 to 3 pm in the middle of the day. Giving logical reasons, the MPA has said that due to traffic hold up and then letting in at one go, the tunnel becomes congested, full of smoke and unhealthy for old people having respiratory problems. If instead of that vehicles are allowed to go inside as they approach there would be no congestion in the tunnel and traffic will flow freely. he said because there is no exhaust system it is all the more reason that traffic is not held and let inside in convoys but there should be free flow of traffic like all other tunnels. He also showed concern about the approach roads to the tunnel, specially the northern side.

Chitralis have expressed gratitude to the MPA from DIK for taking up their important problem, which does not require any money; it just requires good governance. .. CN report, 13 Aug 2021