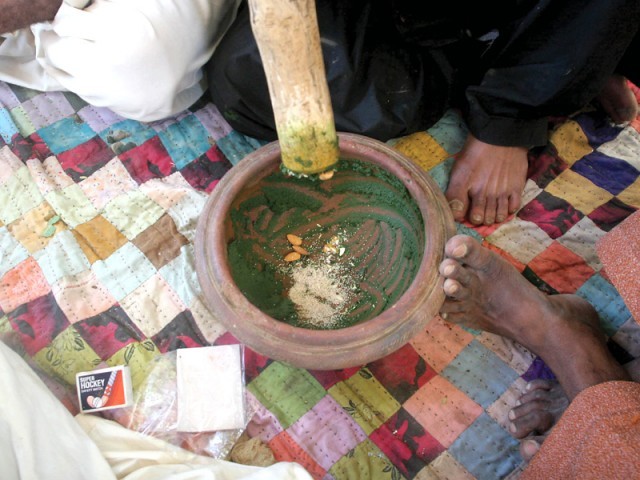 HYDERABAD:?The Sindh High Court (SHC) has taken up a petition pleading for legalising the sale of bhang, an intoxicating herbal concoction made from cannabis. The bench, comprising Justice Muhammad Iqbal Mahar and justice Irshad Ali Shah, has put the Sindh government and the secretaries of health and excise departments on notice for October 16.

The petitioner, Amanullah Soomro, pleaded that he had started drinking bhang in 1970. ?I used to buy bhang from shops, but for many years, it is no longer available at shops due to the government?s undeclared ban.?

He deplored that although the police have banned the sale of the intoxicant, liquor is easily available in the market. Soomro maintained that while bhang is being consumed in all provinces of Pakistan, its commercial sale has come to a halt.

He claimed that bhang was sold at the shops in the urban and rural towns, as well as villages, of Sindh till 1977 and the excise department had issued licenses for its trade. ?With the start of the covert Afghan war during the martial law regime of Ziaul Haq, the drug peddling of heroine and other narcotic items gradually replaced trade of bhang while an unannounced ban was also slapped on it,? he said.

Soomro contended that bhang is also a cheaper and a natural intoxicant in comparison to liquor. ?A small sachet of bhang is sufficient for making one glass [of the intoxicant], which can be sold for as little as Rs10.?

According to him, one of the reasons that liquor and other narcotic items replaced bhang in the market was that all these intoxicants were being sold at high prices in comparison to bhang.

The petitioner told the court that bhang can be cultivated in large quantities in the country. ?The air in Islamabad often carries the scent of bhang,? he said, referring to the bhang weed which grows in almost all parts of the capital.

Soomro prayed the court to order the Sindh government to issue licenses for bhang shops, similar to those issued to wine shops, pointing out that it would result in the government earning excise tax help reduce the consumption of narcotics.