This Chitral village is unaffected by tomato crisis 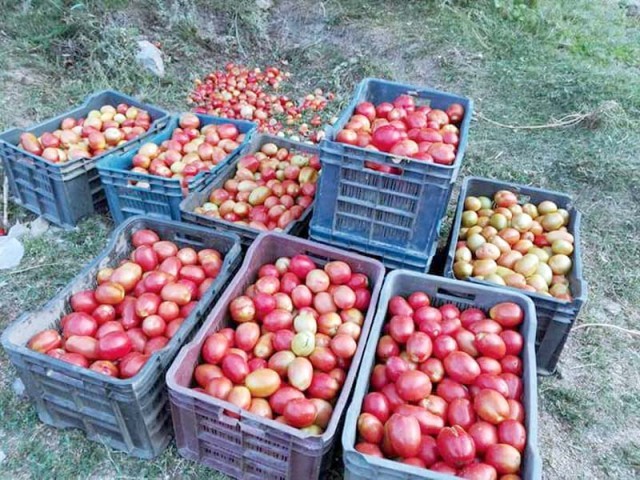 PESHAWAR:?The hike in prices of tomatoes in the country and reports of shortages have worried many across the country who have to run their households on limited funds every month.

But even as the price of tomatoes soars past Rs300 per kilogramme in some metropolitan centres of the country, people living in the small valley of Chitral in Khyber-Pakhtunkhwa (K-P), are not worried.

The 3,000 households in the valley grow and supply tomatoes to the rest of the district and further to the country.

Karimabad?s Dronil union council in Lotkoh Tehsil ? located around 35 kilometres north of Chitral is home to the tomato crops.

The Dronil village ? which comprises around 30 households ? is famous for tomato cultivation. Indeed it forms the economic backbone of the area where 70 per cent of people are dependent on the crop for sustenance.

But this was not possible a few decades ago. 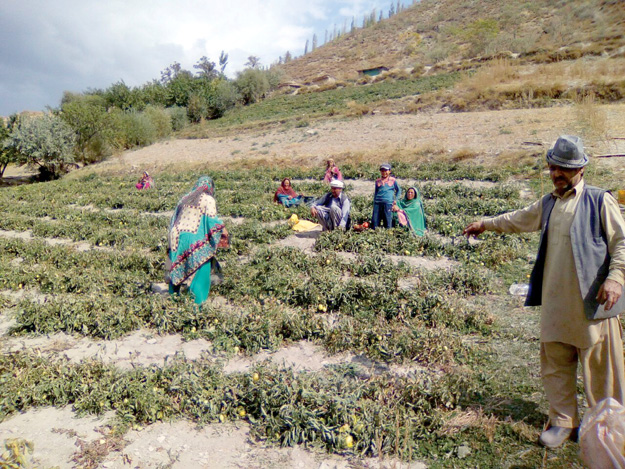 Israruddin Saboor, a resident of the area, had travelled hundreds of miles to the port city of Karachi to study the art of business to turn around fortunes at home.

?I tried for around four years to find out which season was ideal for growing tomatoes,? says Saboor, now a social entrepreneur based in Karimabad.

Talking to?The Express Tribune?via telephone from Chitral, he said that they are supplying around five to 10 tonnes of tomatoes to Chitral, Dir and other nearby districts such as Swat and Mardan on a daily basis.

Counting the environmental cost of tourism in Chitral

But as winter sets in and the ground freezes, production dwindles to around one to two tonnes per day in December.

His efforts led to a boost in income for locals with tomato crops over a hectare of land yielding an income of Rs0.4-Rs0.5 million per season between August to December.

?Owing to the scarcity of tomatoes, the prices this season are a bit high,? admits Saboor, noting that even locally prices have shot up to as high as Rs80 ? Rs100 per kilogramme.

?In normal days, one can get tomatoes for RsRs30 ? Rs40 per kilogramme.?

Chitral, though, only makes up one piece of the tomato supplying jigsaw of the country, even if Khyber-Pakhtunkhwa bears one of the largest shares of tomato production in the country ? producing around 34 per cent of all tomatoes grown in the country (government data from 2004-05).

The story about the tomato revolution in the quiet hamlet of Chitral is not complete about the impact it has had on the society there, particularly in bringing more women to work alongside the men in the fields.

Saboor says that 70 per cent of the work, including sowing seeds to plucking the fruit off the plants, is done by women. 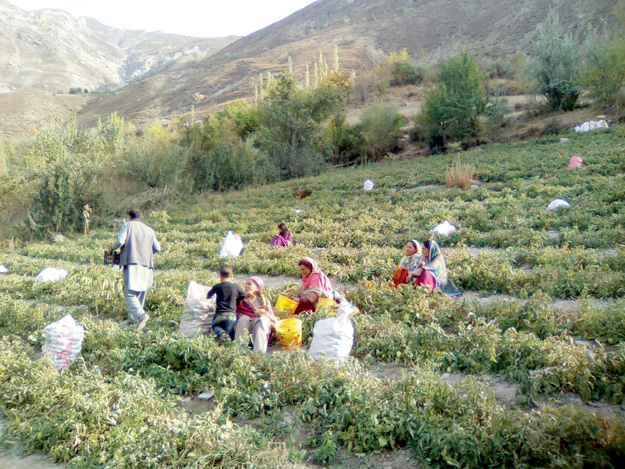 ?Both women and men work side-by-side in the field,? he stated, adding, that the men mostly take care of water arrangements for the plants while the women take of other aspects.

Shakeela Anwar, a mother of four, says working alongside men has helped improve their socioeconomic condition.

?The business helps us in providing better education to our children,? says Shakeela who lives in the Dronil village.

However, she wished that if the government supported their efforts, they could probably increase their yield and be able to increase supplies to the rest of the country.

While the tomato crop offered local farmers a promising return, they have been afflicted by multiple issues including improper irrigation systems and natural disasters.

The flash floods in 2015 were particularly devastating. A damage report compiled by the Justice, Aid and Development Foundation (JAD), stated that the floods had washed away the basic infrastructure of Chitral, including that in Karimabad.

The report stated that the irrigation channels had been badly damaged affecting the agricultural output of the area, including the tomatoes. Cumulatively, the floods had caused the community to lose over Rs1.5 billion in damages to crops, communication and irrigation infrastructure.

Two years on and the community has yet to fully recover from the damage by the floods.

Farmer Zarin Khan told?The Express Tribune?that the biggest hurdle they were facing in raising crops were the damaged irrigation system.

While some non-government organisations had helped set up basic irrigation channels, Zarin said that they had lost two months of the spring season owing to maintenance work on the eight-kilometre-long open irrigation channel.

Moreover, he revealed that in the entire sub-tehsil of Lotkoh did not have even a single irrigation channel.

?The irrigation channels set up by NGOs can only irrigate around 30 per cent of the total cultivable land,? Khan said, adding, if a proper irrigation system is put in place by the government, they can double crop production rates and yields.

Data compiled by the K-P Bureau of Statistic for 2014 stated that around 230 hectares of land in Chitral are used for growing tomatoes which produce over 1,840 tonnes of the fruit in Rabi season while 124 hectares of land are harvested in the summer season, producing over 1,880 tonnes of produce in the Kharif season.

?If the government fixes the irrigation problem, we can increase production and sow tomatoes in other areas of Chitral district,? Zarin suggested, adding, it?s the only source of income for thousands of families through which they support their children?s education.