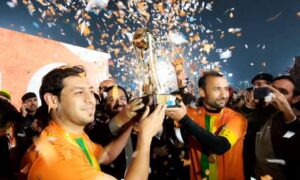 Chitral has seen football growing tremendously in popularity for the past few decades, although the game has been popular since long along side free style polo. Other sports like cricket and hockey etc have seen their ups and downs but football has been resilient in maintaining its popularity. Small fields known as footsal grounds (a mini football version) have sprung up in villages to give opportunity to youngster practice their passion. The Chitral polo ground is amply populated with football payers in the wee hours of the morning even in these wintery day. Ronaldo and Messi are heroes of many youngsters.

The district football Association headed by Hussain Ahmad has been a big factor in promoting football in Chitral by holding frequent matches and tournaments. It is expected that Chitralis would further prove their mettle in the sport in coming times. .. CN report, 13 Dec 2021