CHITRAL: A joint meeting of civil society members and leaders of various political and religious parties was organized by Chitral Development Moment (CDM). The meeting was presided over by Maulvi Israruddin Al-Hilal. For the first time Shahzada Siraj-ul-Mulk participated in this meeting and expressed his views. An unanimous resolution was also passed in the meeting. Through the resolution, the government was demanded for construction of Shandur and Dara Pass roads from Lowari Tunnel. The work on all the roads should be resumed immediately. Funds should be re-sanctioned for the Garam Chashma road. Through the resolution they demanded that the work on Ayunn and Kailash valley roads should not be stopped and that the owners of the lands coming in this road Immediate be compensated. The speakers said that there are mountains and deposits of precious minerals in Chitral, but its lease has been given to non-local influential people, which the local people cannot benefit from these minerals . Through the resolution, the provincial government was stressed to Local people should be benefited from mineral deposits. 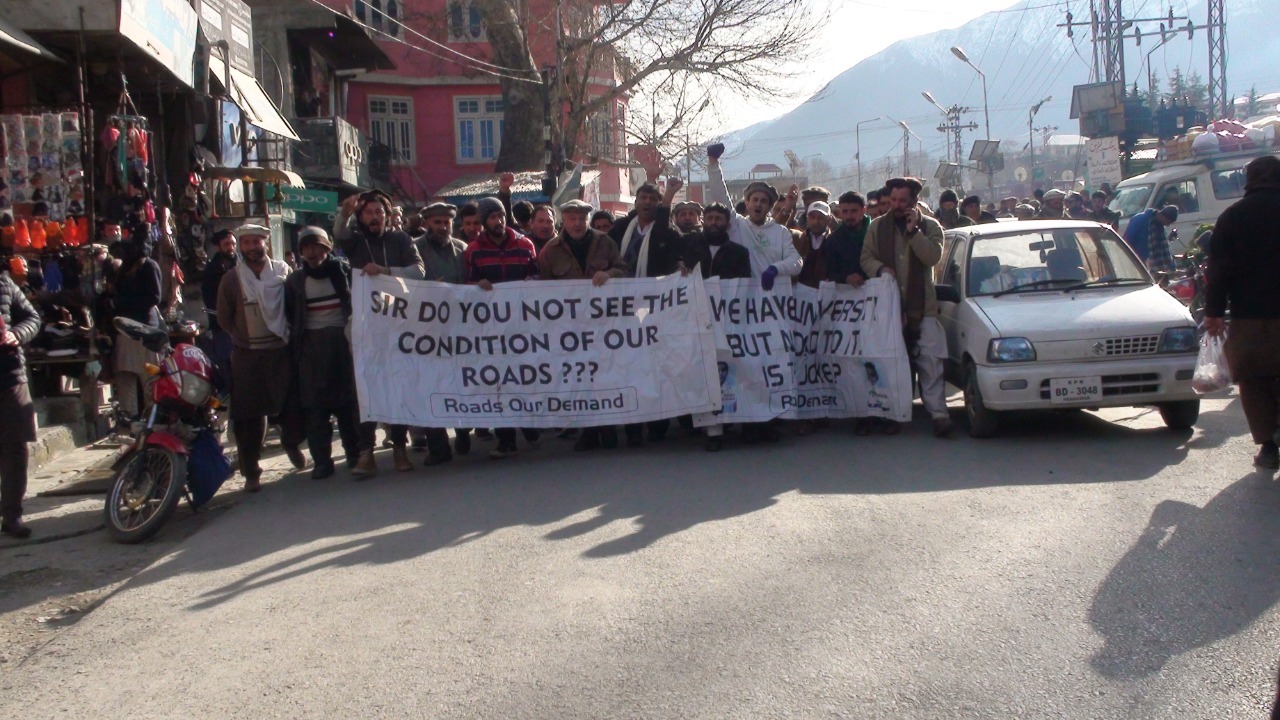 Through the resolution, construction from Drosh to Madaglshst road was also demanded. Arundu, which was also a major commercial center in the past, they demanded that work on this road immediately be started and also pay compensation to the land owners. The resolution demanded that the beautification of Chitral for which 280 million rupees have been approved this work should be completed as soon as possible by doing standard quality work from this fund.

The resolution demanded that as in the past, the local people were given wheat food from the government grain warehouses of Chitral. Wheat should be provided at a discounted rate. It was demanded that the wheat which is given to the flour mill owners from the government grain warehouses, they are increasing the price of flour day by day, this chain should be closed and the people should also be given wheat from these warehouses so that they can use it in the water mill at their own will. More than four hundred water mills have been closed in Chitral, which affecting four hundred families.

The resolution demanded that these water mills must be restored and this cruel decision should be withdrawn. In which only the mill owners have been tried to be happy. A 107 megawatt hydropower plant has been constructed in Golain, but the people of the area are deprived of this electricity and there is still eight to ten hours of load shedding in Chitral. continues while there is no factory and no one steals electricity. Through the resolution, the WAPDA authorities were demanded to stop this cruel and illegal load shedding and provide electricity to the people at cheap rates so that they can use it for cooking and heating purposes.

It was also demanded that the Federal government fulfills its promise by giving 30 megawatts of electricity to Chitral from Golain power plant and giving the remaining electricity to the lower districts.. The resolution demanded for establishment of a Government Medical College in Chitral and the District Headquarters Hospital, which was given category B status fifteen years ago, but has not yet been implemented in this hospital. All facilities should be provided as per category B to DHQ Hospital of Chitral. The construction work of Chitral University should be started soon and work should also be started on Terich Mir University in Qaqlasht of Upper Chitral. The resolution also demanded that the establishment of Intermediate and Secondary Board for both the districts of Chitral should be announced here as soon as possible.

In order to save the forests of Chitral from being destroyed and the environment from affecting the installation work of approved LPG gas plant for upper and lower Chitral district should be started soon in Chitral and the land purchased for this purpose should not be auctioned. Alhaji Eid Al Hussain, Sharif Hussain, Waqas Ahmed Advocate, Liaquat Ali, Inayatullah Asir, Prince Siraj Mulk, Noor Ahmed Khan Charwelo, Sultan Nigah, Shabbir Ahmed, Rehmat Ali Jafar Dost, Chaudhry Amanullah and others expressed their views. . It was deeply regretted in the meeting that the road widening by the National Highway Authority contractor from Chitral, which was built by a Chinese construction company forty years ago, but the coal tar was still very strong, and the NHA contractor removed coal tar from the entire road which has been turned into a cross-shaped ruin, and the road was not being blacktopped. As a result passengers face a lot of difficulties while traveling on the road. The speakers warned the government that we are peaceful people and demand our genuine and legitimate rights in a very civilized manner but we not be compelled for taking stern action.

Later, the participants of the meeting took out a rally in which all civil society members and representatives of political parties also participated. The meeting ended with prayerful words. .. Gul Hamaad Farooqi, Chitral 21 Jan 2023