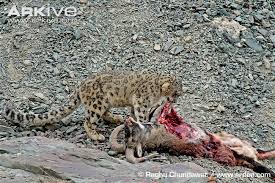 Chitral : The snow leopard, a protected wild life specie has caused collateral monetary damage to the people of Yarkhun valley, where the leopards are attacking? herds of cattle out in the summer pastures. So far six cows and 14 goats have been devoured by these leopards only in the last one week according to reports reaching here. Owners of the cattle have demanded compensation from the government for damage to their hoofed income source,? at the hands (paws) of the wild cat. .. Muhkamuddin Ayuni, 20 Jun 2018