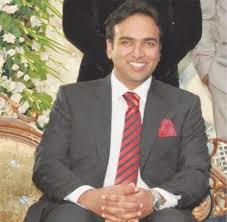 According to Shakespeare this mortal world is a theatre, men and women are characters, their roles are predetermined and everyone is shown entrance and exit according to the script. Osama Ahmad Waraich, his wife and five month daughter had their exit from this theatre along with 39 passengers and 6 crew on board PK 661 near Havellian just a few minutes before the plane was bound to land at Benazir International Airport Islamabad.

Waraich was 31. He would explain his first name to his new friends and liked to say this has nothing to do with Bin Laden, it is a reflection of my Parent?s love and respect for Osama bin Zaid (RA), the youngest commander in chief of Muslim troops seen off by the Holy Prophet (PBUH), a few days before his demise. We know that in 1975, the name of Bin Laden was not known even in CIA circles.

Waraich was born in the family of Dr. Faiz Muhammad Waraich, a renowned professor of Mathematics associated with the Quaid Azam University and NUST Islamabad. The family hails from Vehari District of Punjab. Justice (Rtd) Iftikhar Cheema and IGP (Rtd) Zulfiqar Cheema were his maternal uncles. Osama Ahmad Waraich was an engineer by profession, however, he was inclined to the Pakistan Administrative Service due to family trait and toeing the footsteps of his elder brother.

After passing out from Walton Academy, Lahore, he was posted to Khyber Pakhtunkhwa. He served in three Sub Division as Assistant Commissioner and Two Districts as Additional Deputy Commissioner and Deputy Commissioner. His posting in Chitral proved to be the last posting. He landed in Chitral on 16th October 2015 Just 10 days before the disaster of 26th October earthquake and his plane took off from Chitral on Dec 7,2016 Just 37 minutes before the disaster of air crash in Havellian in which he was perished. Though this was the end of the story, but Shelley says, this is not the end. In an elegy for his friend John Keats, Shelley says;

?He lives, he wakes, its death is dead not he:

Turn all the dew to splendors for from thee?

Like Shelley and Keats, our Waraich wanted to do great things in a short span of time. All the three knew perhaps they had a short time to live, so they were in a hurry. Keats died at 26, Shelley at 32 and Waraich at 31. During his 14 month tenure in Chitral, he initiated three major Campaigns. His administration launched operation against encroachments in bazaar and demolished 60 year old structures to clear the roads and streets. He replicated the Chitral scouts park on Booni road and carved out a park on the river bed. An academy for coaching students of entry tests was yet another initiative which he undertook beyond the call of his duty. Some friends suggested to postpone some of his interventions till next spring, but he wanted to get it completed before the end of this fall. His intuition would most probably tell him that your life span is shrinking. He was a man of upright character. In the Civil Service Academy, many young officers from sober and respected backgrounds get spoiled due to the disorientation they get during the training. They come out with a despotic approach and corrupt outlook. However, Waraich was a different man who was not disoriented against the people even in his training at the Civil Service Academy. No doubt he was a restless soul well described as dead honest, hardworking and energetic Civil Service officer by one of his colleagues, Abdul Akram in his tweet on the sad incident of the December 7.

The fate of Waraich and his fellow passengers aboard the unfortunate plane reminds me the poem of Tennyson on Ulysses. The Poet says;

Souls That have toild and wrought, and thought with me:

That ever with a forlic welcome took;

The Thunder and the sunshine; and opposed;

Today we mourn the death of our friends and lovely fellows on the cabin and cockpit of the flying Titanic popularly called ATR-42, we are mistaken because everyone on board the plane has turned into a living soul. ?As Shelley Says ?the death is dead?. — Dr Inayatullah Faizi, Chitral 15 Dec 2016.

One thought on “Waraich: A Restless Soul”