For the sake of their people, India and Pakistan should mend fences

CHITRAL: Ever since division of the subcontinent in 1947, the people of India and Pakistan only know one thing -that the other is your enemy. Both countries have been playing the wicked game of animosity with a neighbour and people of both countries have had to pay dearly for it. The weekly parades at Wagah border where soldiers take pride in being able to stomp the ground harder and raise their legs higher than the opponent, with frenzied spectators shouting and jeering on each side, are a reminder of the colosseums of Rome where spectators enjoyed watching gladiators fight each other to death. 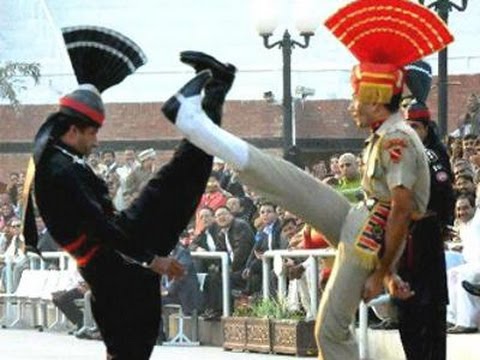 The perpetual fomentation of hatred between the two countries has led to conditions where the people of Torkhow in Pakistan cannot get their lifeline bridge for lack of funds or the people of Orissa in India have to defecate in the open for lack of toilet facility. Where does all the wealth of these countries go?!

If thought over calmly as to why and how have the two countries forever been put at loggerheads with each other, and who have been the beneficiaries of this animosity, it is not difficult to understand that those who manufacture and/or use weapons are the biggest proponents of perpetual hatred leading to battles and wars between the two countries, time to time.

Pakistanis and Indians have a rich source of manpower and superior brains. Expats from both countries have lifted up the condition of many countries. Many American companies like Google, Microsoft, IBM etc are headed by Indians and many Pakistanis are in Key positions in the American progress industry, but back home they are above board and thus irrelevant as there countries are too busy manufacturing and developing hatred against each other instead of attending to progress of their people.

It is time, leaders both civil and millitary, from both sides, should put their heads together and coolly ponder over this self inflicted perpetual cold war which is grinding out heavy damage to the life standards of both people. Those who quote religion as basis for this detestation should be explained that no religion preaches harbouring disdain about other religions, let alone be hostile to them.

If any good for the people of the region is intended, Pakistan and India have only one option -the option to live like good neighbours instead of looking for friendship in distant lands and cultures, because, as correctly said, “you can change friends, not neighbours”. .. CN report, 06 Jan 2020

3 thoughts on “For the sake of their people, India and Pakistan should mend fences”