CHITRAL:  Hundreds of people of Mastuj Tehsil of Upper Chitral District under the leadership of Prof. Dr. Muhammad Ismail Wali started construction of  30 km road of Mastuj on their self help basis. . Earlier that , a briefing ceremony was held near Mastuja Bridge in which Prof. Dr. Muhammad Ismail said that since not a single kilometer of (blacktop) road was paved in the entire Upper Chitral district, there was a risk of frustration and revolt among the youth. I want to divert the emotions of these frustrated youth towards positive work so that conditions like Balochistan and Bangladesh do not arise here. This campaign was started with prayers words. .

Hundreds of people from  Mastuj marched towards the road with their spades, shovels, tractors, trolleys and other equipment to blacktop the road on self-help basis. , the volunteers began repairing and constructing the 30-kilometer road themselves. 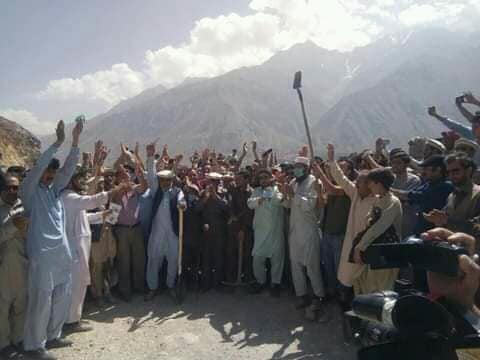 Talking to our correspondent, Prof. Ismail said that we do not challenge the government’s writ nor do we revolt against the government’s allies but our objective is that Pakistan has given us a lot and now Pakistan’s economic situation is weak. That’s why we want to help the government. In the first phase, the road will be repaired, leveled and then it will be blacktopped. So far we have not solicited donations from no body but if anyone wants to donate voluntarily they will be welcomed.

Former Tehsil Nazim Shahzada  Sikandar-ul-Mulk said that we had built this road 25 years ago and we were looking forward to the government agencies that maybe they will come and help us but in the last 20 years no government has paid attention to this road.  we are forced to build this road with our help and take it to Bani Gala and  will invite  Prime Minister Imran Khan to come and inaugurate the road after completion.

Hasil Murad is a social worker who says that the government has not built this road in last  twenty five years. This road is very narrow and there are a lot of pitches  in its middle  and many vehicles have faced accidents,  fallen into a deep ravine  In which many precious lives have been lost.

Another social activist, Subedar Rahmat Zar said that Chitral was formerly an independent state and we aspired to join Pakistan but unfortunately we are being treated like stepmothers.

Prof. Ismail says that all the places of tourism are located in Mustuj Tehsil. In this area there are beautiful valleys like Shandor, Brugal where thousands of tourists come every year but they face many difficulties due to earthen and poor condition of road. The people of the area decided to build this road on self-help basis.

Saima Ayub, a local woman  from the area, said not even a single  kilometer of road beyond Booni  was paved. There have been many accidents while crossing this narrow and dangerous road and most of the women die before reaching the hospital. It is very dangerous to take these women to the hospital on this road during maternity.

Bisma  Aziz is a college student. She says that when she goes to college on this road, she is very scared because we have had many accidents and the car fell hundreds of feet down into a deep ditch and fell into the river and lost many precious lives.  Our lives are in danger on this road. She  appealed to the provincial and federal government as well as international donors organizations and philanthropists to help them in the construction of this road.. she also demand from  the government agencies C&W or NHA to come and build this road immediately so as to save them from more accidents and miserable life. .. GH Farooqui, 20 Aug 2020